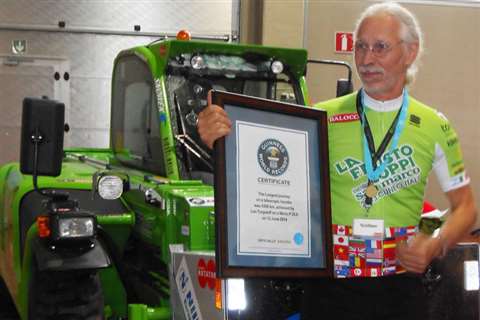 His feat has been recognised as a new The Guinness World Record for ‘The longest journey aboard a telehandler’. Merlo added that this remarkable drive demonstrated the strength and durability of its machines’ hydrostatic transmission, which gives the compact machine a top speed of 36 km/h.

Mr Terqujeff’s arrival was celebrated at the headquarters of Merlo’s Finnish importer, with the final few kilometres being monitored on a cab-mounted camera that relayed pictures via on-board MerloMobility geolocation and telematics system. This system helped monitor the health of the P 25.6 during its marathon journey