Reducing the cost of ownership 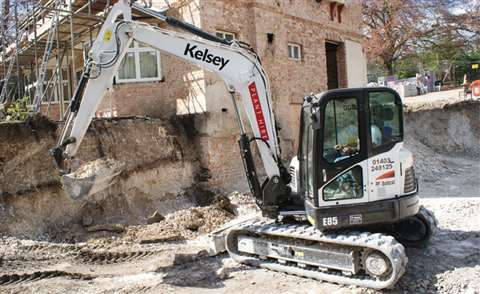 Europe’s market for construction equipment is expected to increase from an estimated €8 billion in 2013 to more than €9 billion by 2017, according to Off-Highway Research. With one in three machines sold in the region a mini excavator, demand for these popular machines seems set to rebound.

In this competitive industry, many manufacturers are putting huge efforts into making their latest machines more efficient in order to reduce ownership costs for contractors.

Indeed, the relevant off-highway diesel exhaust emissions laws affecting compact equipment are now in place (EU Stage IIIB/US Tier 4 Final). Many expect these regulations to be the final big step in emissions laws for some time – and now research and development spends can be refocused elsewhere.

Bobcat’s new 8 t class E85 model, for instance, is now making its way onto the rental market. Powered by a 44.3 kw Yanmar engine, the machine boasts an upgraded hydraulic system that is said to result in higher pressures and flows – in fact it claims bucket digging forces have been increased 13% over the previous model.

Nadine Clark, Kelsey Plant Hire joint director, said the purchases were part of expansion plans to meet a growth in demand and increased confidence in the market.

“Following an excellent period in the second half of 2013, which has continued in the first part of the year, we have decided to expand our fleet to meet the increased demand,” Ms Clark explained.

One of the first rental customers for Kelsey Plant Hire’s new Bobcat E85 excavator was NWJ Bignell Landscape Contractors, which is a groundworks and landscaping business based in Coulsdon, Surrey.

Owner Gary Bignell said, “I will definitely be asking for the E85 for use on some of our future projects where its responsiveness, digging power and manoeuvrability will be key assets.”

Reduced operating costs were also a key factor in Kubota’s latest new launch – the near-zero tail swing U27-4. This is a 2 to 3 t class machine that comes fitted with anti-theft technology to increase fleet security. The company said it was designed after extensive research and development with operators worldwide.

“The feedback we received in the 2.5 t class highlighted that users wanted more space in the cabin and increased comfort levels, while not compromising on performance levels. The new Kubota U27-4 machine has been manufactured to exceed these requirements.”

Production has also now begun on Yanmar’s latest mini excavator – the 2.6 t SV26, an ultra-short radius machine, aimed at a range of applications, including urban renewal, agriculture and landscaping.

Power comes from a 3 cylinder, 1.4 litre Yanmar diesel that generates 17.4 kw at 2,400 rpm. The machine is also available with an auto-idle option to reduce further its fuel consumption, which Yanmar said stood at less than 4 litres/h.

In fact, Yanmar Construction Equipment Europe managing director Jean-Marc Reynaud said fuel consumption on the new model – which replaces the B25V – had been reduced by 20%.

“We are targeting the European rental market with the SV26,” he said. “We are at the beginning of a new fleet replacement cycle in Europe, and this year we are forecasting growth particularly in the UK and French rental markets. We aim to sell up to 400 SV26s this year both to direct buyers and rental companies.”

Gearing up for growth

For its part, manufacturer JCB said it was gearing up for “massive growth” in the compact excavator market, a sector it said was expected to increase to over 200000 units by 2017.

And reduced operating costs were at the heart of the design process, according to the company. All three models sport Stage IIIB/Tier 4 Final-compliant engines, and JCB claims they consume 10% less fuel than previous models.

Meanwhile, David Wood, Caterpillar product application specialist for mini-excavators, said 2013 had been a relatively good year for sales.
“We continued to see growth in Northern Europe and the UK.

In addition, in Poland the mini-excavator is starting to replace manual labour. The 8 t mini excavator market has seen particularly good sales, with the Cat 308E2’s versatility and compact dimensions perfectly suited to on-highway utility projects."

Caterpillar has a manufacturing alliance with Wacker Neuson, which itself has introduced a new dual power version of its 803 mini excavator.

This 900 kg machine can, in addition to the standard diesel engine, be connected to the external HPU8 electro-hydraulic drive unit.

However, the dual power option will not be available on the mini excavators supplied to Caterpillar through the manufacturing alliance.

“The use of alternative power in mini-excavators will continue to grow for indoor applications,” M rWood said. “Although we monitor developments with interest, we have no immediate plans to introduce a model in this area.

He added, “Our new [8.4 t class] 308E2 compact radius benefits from a more efficient engine and hydraulic system, and delivers up to 13% less fuel consumption than the previous model, with no impact on digging performance or productivity.”

The manufacturer claimed this model, too, was more efficient than its predecessors, boasting a 10% reduction in fuel consumption thanks to an ECO mode, load-sensing hydraulics, and an automatic idling system and engine shut-down function.

The latest compact excavator from Hyundai comes in the form of the 6 t class R60CR-9A, a short tailswing model that replaces the previous R60CR-9.

Here, too, reduced operating costs were a key design goal.
The machine is powered by a 48.3 kw Yanmar 4TNV98C, Tier 4 Final/Stage IIIB-compliant diesel engine, which Hyundai said offered a 10% increase in power over the previous model, while reducing fuel consumption by 14%.

Meanwhile Hanix, which is a brand owned by Japanese manufacturer NKK and its parent, China’s Beijing Jingcheng, has introduced a new model on the smaller end of the weigh scale.

It is one of several players offering micro excavators (less than 1 t operating weight).

Its latest machines include the 990 kg H09D micro and the 1.7 t H17D mini, both of which are designed for space-restricted urban sites, and also targeted towards the rental industry.

Body panels are all steel construction to withstand everyday site knocks, and the boom cylinder is located above the boom to protect it against accidental damage when digging.

Kobelco Europe, meanwhile, has introduced three new mini excavators into the region in the shape of the 2.6 t SK27SR, 3.4 t SK30SR and 3.7 t SK35SR zero tailswing machines. All three are built in Japan and were expected to start arriving in Europe in May.

Lowering operating costs was a key design feature here as well – the new machines boast a new dozer blade and a boom offset function to allow digging along trenches and walls.

In addition, triple oil-pump technology is said to ensure continuous and refined digging, travel and load performance, according to the manufacturer.

At its plant in Tuscany, Italy, Ihimer has started production of the first model in its new V4 series of mini-excavators.

Ihimer, which is a joint venture between Japanese manufacturer IHI Construction Machinery and Italy’s IMER Group, presented the first prototypes from the new range last year. The first production model to roll out of the factory is the 2.7 t class 27V4.

Ihimer said the production start marked the beginning of a phase of industrial development of vital importance to the Italian construction equipment sector as a whole.

The manufacturer said 200 27V4 units would be produced before December this year, with orders already placed for more than 70% of this total. It said the machines would be distributed throughout Europe.

Available in both canopy and cab versions, the 27V4 boasts a 13.6 kW IHI S773-C engine that the company said kept fuel consumption and emissions to a minimum, and has a front swing radius of 2,030 mm and tail swing radius of 775 mm.

Factory-fitted tiltrotators as an option

From May 2014, Volvo CE started offering a factory fit tiltrotator option on its 5 and 8 tonne compact excavators in Europe – the Steelwrist couplers feature a front pin lock (FPL) and integrated control system, as well as a tilt angle of up to 450°.

The installation includes integration with the excavator’s own safety systems, as well as ergonomic, multifunctional joysticks and a colour display. The FPL system is also said to exceed regulatory requirements and means that attachments are engaged through two separate
mechanical locks.

“The risk of dropping a bucket immediately after a tool change is considered by leading construction companies to be one of the greatest safety risks on a construction site,” said Mr Ray.

“The patented positive lock indicator means the coupler indicates to the operator that the coupler is locked in position and therefore greatly reduces the risk of dropping. This innovative system differs from other symmetrical quick couplers in that they only have a negative indication, which signals that the coupler is open.

“The factory-ready option means uniform installation of the tiltrotator system. Dealers will not have to use workshop facilities to fit the system, and customers will have the reassurance that fitment is identical time and again, and fully supported by Volvo in respect of warranty and parts.”

A similar system will be available from Steelwrist for retrofit on existing excavators in both established and new markets.

This is a feature from IRN magazine. For the full article, including images of the products mentioned, see the June 2014 issue of IRN.