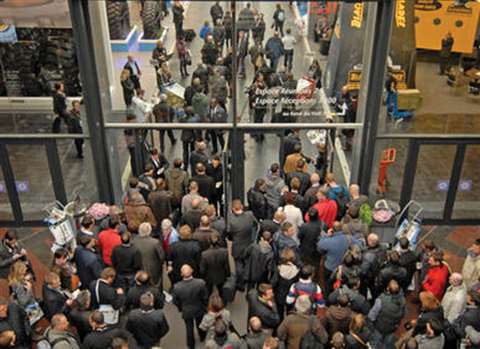 Three years have flown by sine the 2012 edition of Intermat, and this year’s largest construction equipment exhibition is just around the corner.

Taking place from 20 to 25 April at the Paris-Nord Villepinte in France, this 10th edition of the show is set to take up 375000 m2 of exhibition space, accommodating 1500 exhibitors. The 2012 exhibition attracted over 200000 visitors, 34.2% of which were international – and no doubt the organisers will be looking to match or exceed these figures this year.

The organisers said they had seen 238 new brands register for the show, including the comebacks of Manitowoc Crane Group and Manitou, the latter joining Fayat, Haulotte and Mecalec.

Situated at the front of Hall 7, WOC Europe will feature products from the concrete and masonry sector targeting the commercial construction industry, including concrete mixing equipment and machinery, concrete production equipment, pre-cast tools, equipment for concrete placing and software packages. Demonstrations of the latest innovations in concrete will take place on the plaza outside the hall.

Emphasis will be placed on a programme of educational presentations and training & demonstration workshops, which are a key component of all World of Concrete events.

For the rest of the Intermat show, a new exhibition layout has been introduced – as well as using the new Hall 7, the show will also take up the outside demonstration areas together with halls 5A, 5B and 6; instead of halls 3 and 4.

And together with the emphasis on concrete through the WOC Europe partnership, Intermat also plans to shine a light on the demolition and recycling sector as well as hand-held construction tools.

The machine runs from mains power via a changeover switch; alternatively three towers can be linked together to run from one engine consecutively, offering almost 400 hours of usage, according to the company. Morris said the TL-90 LED uses 50% less fuel than a standard lighting tower.

And the company said it would also have the Hilta Sprite 2 in (559 mm) petrol diaphragm pump on show.

Managing director Phil Winnington said, “With a long standing reputation for providing innovative and high performing machinery throughout Europe, Intermat provides an excellent opportunity for us to strengthen our existing international business links through networking and meeting with key decision makers in the infrastructure and construction industries.”

Magni, meanwhile, plans to showcase examples from its telescopic handler range at Intermat, including its new dedicated range for rental ­– the RS Range, which will be introduced during 2015.

The company said, “18 m and 21 m machines are nowadays the most rented models in Europe, because of their good lifting capacities. But we are trying to push the rental market ‘higher’, offering 23, 25 and 26m models with better load charts.”

Plenty of launches are planned in the general earthmoving sector too, with Liebherr to premier a new crawler excavator at the show, and also showcase new dozers and concrete pumps, among other equipment.

The company’s new Stage IV/Tier 4 Final PR 746 and PR 756 dozers will also be on show, with operating weights of 20 to 40 tonnes, while the new 37 Z4 XXT truck-mounted concrete pump will also be on the stand, featuring a four-section 37 m boom.

RDS, meanwhile, said it planned to showcase a new retrofittable weighing scale for tracked and wheeled excavators in the form of the Loadex 100. Designed to weigh the amount of material in the bucket, the device has been developed to operate within the fastest loading environments maximising tonnes per hour performance.

And the company said it would also have its Loadmaster a100 on-board weighing scale for wheeled loaders on display. It said this device features a new CAN based system combining sensor technology and signal processing techniques to provides precise and consistent bucket weight information.

The Loadmaster a100 uses a 7 in (178 mm) colour touch screen display and additional physical keys and is said to be suitable for use with up to 10 different attachments – e.g. buckets or forks. The system can also be retrofitted onto wheeled, telescopic and tractor type loaders.

For smaller loaders and skid-steers, RDS offers the Weighlog a10, which also benefits from a colour touch screen display. This instrument is said to be a user friendly on-board weighing system which provides accurate and consistent bucket and total load results, meaning stock management and check-weighing operations can be controlled more effectively.

This is just a first glimpse at some of the equipment that will be on show at Intermat 2015, with a full show guide available in the March issue.

This is a show preview from the January/February issue of IRN. For the full feature, including extra images and box stories, please subscribe to the magazine: http://www.khl.com/subscriptions/