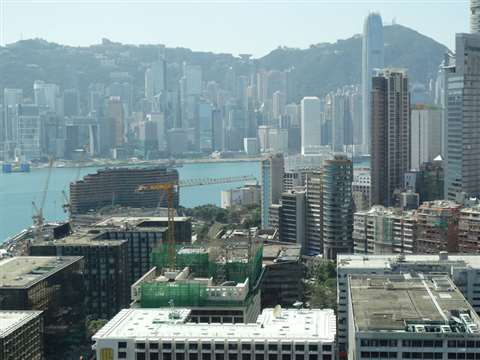 The 10CJ140 tower crane on the roof of The Royal Garden hotel in Kowloon, Hong Kong

Work on the 5-star hotel included extending it from 12 to 15 floors. For the project a 10CJ140 tower crane was supplied by Linden Comansa distributor in Hong Kong, Proficiency Equipment. The 10CJ140 has a capacity of 8 tonnes and was erected on the roof of the hotel.

Challenges during the project included the erection of the tower crane and a six hour window in which the company could work in, Monday to Friday.

To help erect the crane, two derrick cranes with capacities of 1 and 5 tonnes were installed on the roof of the hotel.

The tower crane, from Comansa Jie in China, was installed on a 6 metre folding cross base, which was placed in the rooftop swimming pool. Once several of the tower sections were erected, a hydraulic jacking cage was added to the tower, before sections of the rotating part were added, a spokesperson said.

Paul Hung, Proficiency Equipment operation and marketing manager, said, “Teamwork between all stakeholders has been fundamental to come up with the best solution. In addition, we have had to negotiate with the authorities and managed a very tight plan. The experience has been a little stressful but very satisfactory for all parties.”