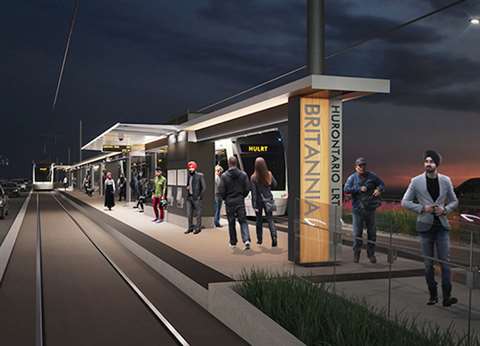 Artist’s rendering of a Hurontario station

The Mobilinx consortium ­­– consisting of John Laing, Astaldi, Hitachi, Transdev, Amico Concessions and Salini Impregilo as lead contractors – have won the position of preferred bidder for a US$1.05 billion contract to build a light rail system in Ontario, Canada.

The Hurontario light rail project will see 18km of new “dedicated rapid transit” with 19 stops and a new maintenance and storage facility for light rail vehicles.

Infrastructure Ontario and Metrolinx will award the contract, with the winning team expected to sign formal contracts within a few months.

Design work will begin shortly after the project has been awarded, with Mobilinx hoping that its design team – IBI Group, Hitachi, Morrison, Hershfield, Arcadis, Daoust Lestage and EXP – will be the ones taking on the task.

Astaldi and Salini Impregilo are of course linked by the latter’s vision for project Italy, but also recently worked together on a high-speed rail project in Italy worth around €600 million (US$664 million).