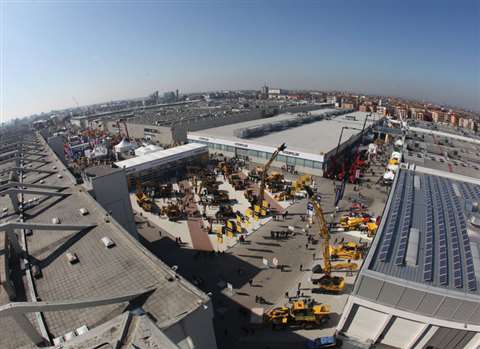 The Samoter show in Verona, Italy

Verona, Italy, is the home of the Samoter show, which is held every three years, and is running alongside transport and logistics show Transpotec, and Asphaltica for the roadbuilding industry.

From 22 to 25 February, visitors will be coming to Veronafiere for what is claimed to be the only business-to-business event in the European calendar for 2017 that fully represents the construction sector – including earthmoving, concrete, drilling, crushing, lifting, vehicles, components and services.

While Samoter will see its 30th edition this year, Case is celebrating its 175th anniversary, and its stand will include a full display of machines including wheeled loaders, crawler excavators, compact tracked loaders, skid-steer loaders, and the T Series backhoe loaders and mini crawler excavators.

In upgrading its T Series backhoe loaders, Case said it was taking the opportunity of Tier 4 Final compliance to introduce improvements and more choice for customers – as well as the new Case livery.

The new models achieve the emissions standards with Case’s SCR-only (selective catalytic reduction) solution, with no need for a Diesel Particulate Filter (DPF) or regeneration. It said the efficiency of the SCR aftertreatment system had been optimised so that Tier 4 Final standards were achieved without a Diesel Oxidation Catalyst (DOC).

Samoter will see the first appearance of the all-new Case C Series mini excavator line with six models in the 1.7 to 6.0 tonne class. These are the first products of the new range, which will be extended with additional models during 2017.

The new C Series claims better performance, a rich array of features, and even greater comfort and safety compared with the previous model.

Hyundai’s exhibits will include a number of mini-excavators, including the R30Z-9AK, which is making its world premiere at the show.

The company will also be showing several crawler excavators, a wheeled excavator, the HL955 TM wheeled loader tool master, and the HL975 wheeled loader – another model making its world premiere at Samoter.

Hyundai has created what it is calling a Rule the Ground scene where machines will be displayed in their natural environment – a construction site. There will also be a sledgehammer game on the booth for the entertainment of visitors.

It will be the first time that Kobelco Construction Machinery Europe (KCME) has been to Samoter, and it will be showcasing a wide range of excavators at the event.

These will include the SK55SRX-6, which is one of the latest Kobelco mini excavators to be launched onto the European market. The company said it could deliver up to a 23% reduction in fuel consumption.

Then the SK85MSR-3 has a two-piece boom that enables operators to work across a wide operating range while still claiming to provide smooth hydraulic operation, high performance and increased fuel efficiency. This model is said to be suited to compact jobsites as the adjustable boom enables more digging space within the same area.

The new SK180N-10 is said to be ideal for mountainous or remote areas where the working conditions are particularly tough. The machine’s narrow carriage track of just 2,500mm also enables easy transportation.

The SK350NLC-10 is said to have low emissions and reduced operating costs. KCME said it had enhanced durability that meant that it could withstand the toughest terrain and working conditions, and was well suited to applications such as demolition, general excavating and quarrying.

Among the Italian-based companies exhibiting in Verona, Venieri will present a new wheeled loader range equipped with a new Deutz Stage IIIB engine – the VF 5.63C, VF 7.63C and VF9.63C.

The Deutz engines are said to deliver high torque at low rpm, while 4k linkage claims to guarantee a maximum breakout force. A new ROPS/FOPS Level II cabin allows 360° visibility, while the noise inside the new cab is said to be just 70dB.

Italian company Dieci will be presenting its telehandlers.

The Pegasus 40.18/400° is a rotating telehandler, designed for the rental market. The main features are said to be ease of use, strength, reliability and a full range of safety devices, including a load limiter for the basket. It also claims cutting-edge equipment for the total control of the vehicle in every situation. The vehicle features a 400° non-continuous rotation.

Dieci said the Pegasus 50.21 was a particularly significant model for its family of telehandlers with rotating booms. It has a 20.5m high boom, conceived with the aim of improving performance further, as well as the visibility from the driving seat.

The automatic levelling outriggers have been renewed both in structure and in the control system. A larger footprint base allows a higher capacity, said Dieci, with the possibility of working in any extension position, automatically adapting the load diagrams with the outriggers position.

The Apollo 25.6 is a fixed boom telehandler for industry and construction. It is described as the mini handler, designed to meet the needs of small works, as it can fit in tight and difficult spaces such as underground floors, car parks and basements. It has a maximum capacity of 2,500kg and a maximum lifting height of 5.78m.

The Hercules family consists of four powerful telehandler models. Hercules 100.10 is said to be characterised by optimised combustion control and significantly reduced consumption, thanks also to the exhaust gas SCR treatment technology. The maximum lifting height is 9.5m, and the maximum capacity is 10,000kg.

Dieci’s Icarus 40.17 has a maximum capacity of 4,000kg, a lifting height of 16.90m and an empty weight of 12,260kg. The engine hood has been designed to reduce the noise emission and optimise heat dissipation.

Magni Telescopic Handlers said its goal at Samoter was to demonstrate the potential and versatility of its machines, and to let visitors have first-hand experience of the quality of the components and the technological innovations that it offered.

These include an entirely pressurised cab with touch screen “for easy and instinctive use”.

It will be displaying four models of telescopic handlers – three from its RTH range, which it said was characterised by the 360° rotation of the turret, and have working heights from 18 to 39m. One will be from the TH range, which have fixed boom and front stabilisers. This range is Magni’s most recent and will initially include three models with 10 to 20m lift height.

Cifa will have two areas at Samoter – an indoor booth of more than 500m2 and an external area as well. Its truck-mounted pumps on show will include the Carbotech series, with the K45H and the K40H.

The K40H is a new product presented for the first time at Samoter. Cifa said the new model set a market record for the longest boom mountable on three-axle trucks under 26,000kg. With the use of carbon fibre for part of the boom, the K40H has a five-section-RZ distribution arm with a length of 40m.

Among Cifa’s truck mixers, the RY1300 model is aimed specifically at the Italian market. The new CSD 2.0 control system will be presented for the first time at Samoter.

When it comes to truck mixer pumps and the MK32L, a new Easytronic machine management system with LSC and aluminium hose holder will be shown for the first time the show.

Also, Cifa has batching plant mixers, and the DNA 3.0 will be at Samoter. It said that the DNA helicoidal twin-shaft mixers were the optimal way of obtaining a high homogeneity of the mix and operational cost saving.

In Italy, German company Tracto-Technik (TT) is represented by Volta Macchine, which offers sales, service and project consultation for all of TT’s Nodig systems for the trenchless installation of new pipes and the replacement of existing pipes.

The company said that it offered sustainable and economical trenchless solutions. It said that using the Grundomat soil displacement hammer, the complete range of sectors – from sewage to FTTx (broadband optical fibre) connections – can be installed and renewed without trenches.

TT said that gas, water, sewage, district heating, electricity and telecoms/data were connected into single buildings, housing blocks or commercial and industrial plants. Waterproof wall ducts for gas and water pipes allow trenchless installation from the basement of the building without additional assembly pits in front of the outer wall, it added.

The new X·PAD 3.0 is the new version of field software available for Android devices and for Windows Mobile platform. It includes X·Pad Survey for Windows and for Android, and the Construction version for Android.

Leica’s PicPoint is described as an innovative way of measuring points not directly accessible from the GPS, and so it calls it the GPS Contactless.

The X·Pole solution allows work simultaneously with TPS and GNSS using the best features of each system as required and with maximum flexibility.

Klubb to launch highest van mount at MATEXPO
The KT18PZ, to be launched at MATEXPO, is mounted on a Mercedes Sprinter 5T and has a working height of 19m
Latest News