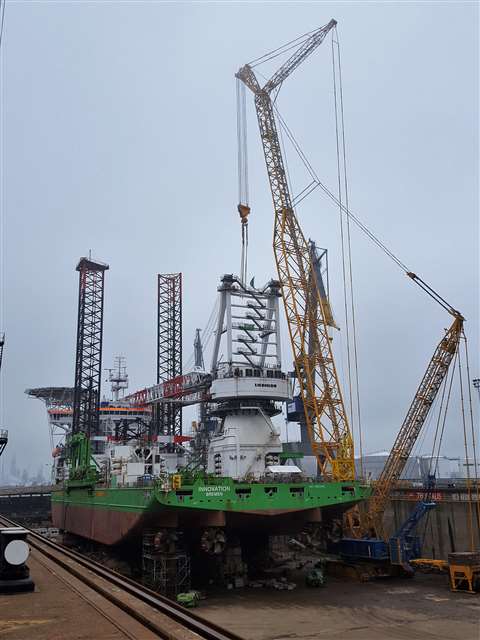 Sarens CC8800-1 rose to the challenge of replacing 350T legs on a jacked-up barge in a congested space for which the project won the “Crane job of the year” award in the lattice boom cranes category at the ESTA Award of Excellence 2020.

The ESTA awards of excellence, recognised as some of the most prestigious awards in our industry, were conducted virtually on 24th September 2020 due to Covid-19 safety concerns. The virtual event was perfectly organised and was attended virtually by over 400 international delegates.

Sarens’ award winning project executed in Rotterdam, the Netherlands, was initially a crane rental project. Analysing the critical conditions under which the lift had to be performed, the client decided to rope in Sarens’ as the complete solution provider, managing the engineering, equipment, and executional supervision.

As part of the scope of the project, the team had to lift the old pre-cut leg sections, transport the new sections, tandem lift the sections, tail and replace the two legs of the Innovation jacked-up barge. The team decided to deploy:

The leg elements weighing 350T were lifted out of the ship at a radius of 37m with a crane boom tip height of 132m. All the cranes had to be assembled at the bottom of a dry dock, 16m below the street level. While working in the dry dock the available space between the barge and the walls of the dry dock was very limited for CC8800-1 with boom booster and superlift carrier. The team carefully assembled the equipment and safely replaced the leg sections within a strict time schedule. The client was very satisfied with the flawless execution.

Sarens wants to thank everyone who helped make this lift a success!