Shantui – Africa is instrumental to future 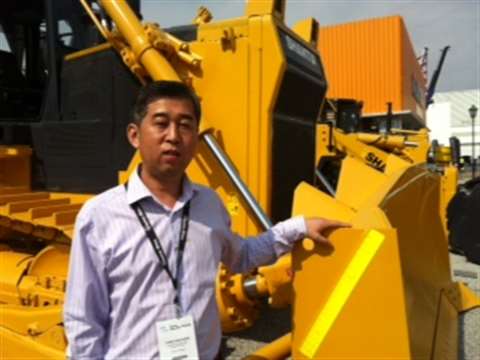 Shantui vice president Cheng Zhaohong: "Shantui started exporting to Africa in 1986, and we have gathered experience of the culture, policies and market conditions."

The African market will play an instrumental role for future growth and development at Chinese construction equipment manufacturer Shantui, according to vice president Cheng Zhaohong.

Speaking during the first Bauma Africa exhibition, which is taking place in Johannesburg, South Africa, Mr Zhaohong said the company had a “very positive” outlook for the next five years.

“We forecast that revenues from Africa will represent at least 20% of our global sales outside China in the next five years, although the figure could be adjusted to account for macro-economic conditions. We forecast African sales growth of around +10% per year,” Mr Zhaohong said.

“Shantui started exporting to Africa in 1986, and we have gathered experience of the culture, policies and market conditions.

"We have 17 distributors in around 30 countries across Africa, and will be focussing in the future on developing our sales, aftersales and service operations,” he said, adding that manufacturing in Africa was also a long-term plan for the company.

Mr Zhaohong said Shantui was looking to develop its service areas in Tanzania, Cameron and Mozambique in the future, as well as Kenya, which it would like to see become an East African hub. West Africa and South Africa are also targeted for future growth.

“Africa is a continent of opportunities and of risks,” Mr Zhaohong continued.

“Currency volatility is a risk, while transportation and logistics are an issue, and infrastructure issues sometimes cause delays, for instance. But this is also an opportunity as governments are looking to improve their infrastructure, helped by development banks and other investors.

"The Chinese government has pledged a further US$ 20 billion investment in Africa’s infrastructure over the next three years.”