On 31 July 2021, personnel from the Tennessee Valley Authority (TVA) witnessed the demolition of the 182 m (600 ft) smokestack and 10 boilers and precipitators at the Johnsonville Fossil Plant in New Johnsonville, Tennessee. 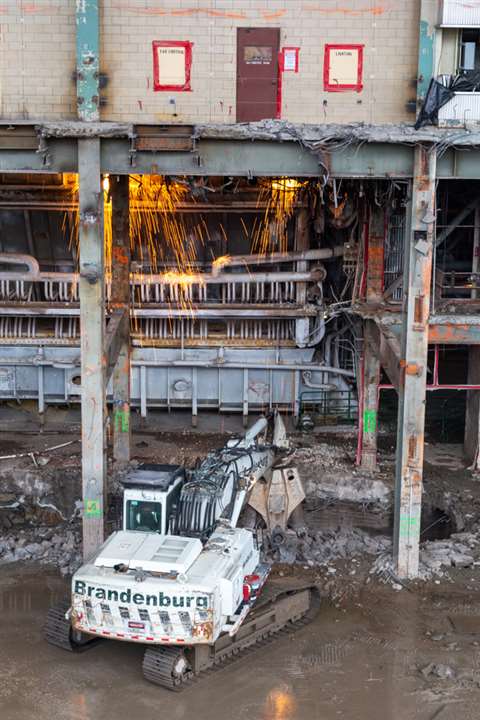 After Tennessee Valley Authority decided to close Johnsonville, Brandenburg won the demolition contract through a competitive tender. All photos: Brandenburg

The demise of that stack represented the end of the 1,500 MW plant. Johnsonville was TVA’s oldest coal-fired power facility and this final implosion cleared the site for future development and opened the door for a new-generation project to advance clean energy technologies.

Johnsonville produced power from 1951 to 2017. As part of a companywide reduction in the use of coal, TVA announced that it would shut down all units at the Johnsonville Fossil Plant by 2018.

At that time, it began the effort in earnest to move toward full demolition of all on-site structures.

Units one to five were shut down in 2015 and units six to 10 were decommissioned in 2017, ahead of TVA’s original schedule. The final vestiges of the plant were demolished via controlled demolition.

Brandenburg Industrial Service Company (Brandenburg) was chosen to complete the demolition project in 2019 after a competitive bidding procedure.

The process required a two-phase review that took into account each bidder’s technical response independently from their commercial submission.

Brandenburg scored highest on the combined analytics and was awarded the contract. Post-bid information confirmed that the combination of Brandenburg’s safety approach along with their description of means and methods were keys to Brandenburg’s successful award.

The destruction of the turbine hall was completed by mechanical means using a Liebherr 984 with a third member attachment, and all non-structural components of the boilers were removed via torch/mechanical means from the basement up to the operating floor. Boilers were brought down to basement grade through controlled demolition procedures.

Brandenburg recycled more than 100,000 t of steel during the project.

Removal of the powerhouse structure, supporting structures and stack was accomplished down to 1 m (3 ft) below existing grade. Strip-out activities were essential because the boiler structure had to have the lower 11.3 m (37 ft) clear of all equipment and piping – except structural building components – to facilitate the implosion of all 10 units.

Demolition work was completed on time and on budget and resulted in the recycling of approximately 100,000 t of steel as well as about 100,000 ts of brick, block and concrete.

The final implosion in 2021 was marked by a statement from TVA’s vice president for major projects, Roger Waldrep: “The team set out to honour the Johnsonville legacy by applying the same pride and integrity in the dismantling of the facility that was exemplified in the building, maintaining and operation of it for almost 70 years.

“Safety is our primary mission, and I’d like to thank the team who was able to complete this portion of the project without any issues.”

The project required specialised knowledge and experience that exemplify Brandenburg’s signature attributes as a leader in the demolition industry. Particularly difficult and challenging aspects of the work included the following:

Demolition and abatement took place adjacent to a functional switchyard, water treatment building and tanks. Access to the treatment plant had to be maintained at all times. 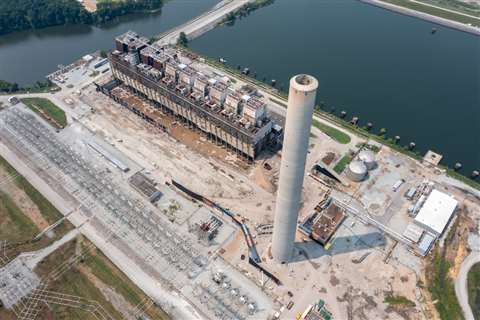 Aerial view of the site. The final demolition took place in July 2021

Live utilities surrounded and ran through the abatement site. The switchyard was quite close to the powerhouse and the stack was only 12.2 m (40 ft) from the live switchyard, various utilities and the water treatment building. The overall footprint of the area was very small.

The installation and maintenance of intake bulkheads had to be performed at the foundation wall of the powerhouse and at a separate location beneath the powerhouse basement floor.

Constant coordination with local water navigational vessels was critical as the work required the use of a 300 t crawler crane with a 97.5 m (320 ft) boom to remove two large barge unloaders.

The precipitators were located on the roof of the boiler and asbestos contaminated material was found on the outer portion of these structures. Containment structures were built on the outside of the precipitators that could withstand various types of inclement weather.

Shoots were built along the accessway to facilitate transportation of asbestos material within the footprint of the boiler down to the bag-out areas.

Imploding the boiler units and stack

The boiler units and stack were all imploded on the same day. Due to the proximity to the remaining structures, an abundance of time, resources and materials were invested to anticipate any challenges and to ensure adequate protection for both personnel and property.

It was determined to be most advantageous, expedient and safe to time the demolition so that the boilers fell first, followed by the stack falling on top of the powerhouse. All structures were set up to fall into the basement of the powerhouse to maximise safety and material containment.

The Brandenburg team defined and deployed a stringent programme to protect people and property during the implosion efforts which took nearly four months to implement. Multiple seismic monitors were strategically placed to check implosion impact.

The project included a programme to protect people and property at the plant.

Brandenburg manufactured about 400 wooden boxes that fit every beam location where explosives were to be placed, then wrapped each in geotextile fabric.

The team used the same fabric to cover the outer columns of six of the turbine, which were approximately 152 m (500 ft) long and over 18 m (nearly 60 ft) wide.

The fabric was also wrapped over each explosive location on the stack. Brandenburg installed more than a dozen 15 m (50 ft) tall telephone poles next to the active switchyard, then spanned geotextile fabric about 12 m in height and 167 m (550 ft) long. Roll-off boxes, site trailers and miscellaneous geotextile was placed around adjacent areas for added protection, and multiple dust bosses were employed.