Skid steer and engines from Bobcat 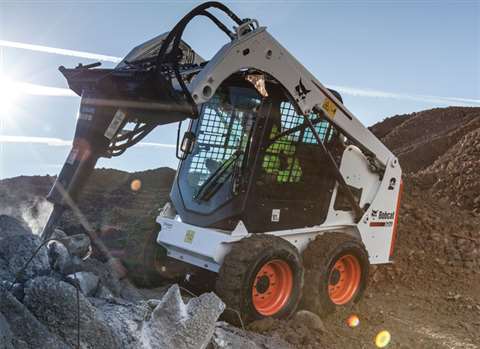 Bobcat has launched a new generation S450 skid steer loader, and it has revealed a range of new EU Stage IIIB and Tier IV compliant diesel engines to be used in the company’s compact loader products in Europe, due for introduction in 2015.

Also, it recently produced its 1 millionth loader, and at the 2014 Bobcat Convention held in Prague, Czech Republic, and the nearby factory and training centre at Dobris, it provide a sneak preview of the E20 mini excavator.

The E20, along with the E17 and E19, are not due to be introduced to the market until the autumn.

Martin Knoetgen, president EMEA (Europe, Middle East and Africa) of Doosan Infracore Construction Equipment (DICE), of which Bobcat is a part, said that globally, Bobcat represented more than a third of total group revenues, and that there had been investment in new products.

“There will be significant gains in market share,” he said, “but we are considering entering new segments with the Bobcat brand.”

The new generation S450 skid steer loader is said to be combining the advantages offered by “a truly compact loader” with many of the new features and improvements found on the larger Bobcat new generation models.

Freddy Remory, product manager for compact loaders said the S450 was replacing the S130 – “the most popular model”. He said that to achieve the level of operator comfort that was being sought, the company took the existing cab from the large models and put them on the small and medium loaders.

“So there is the same comfort as on the biggest machines in the range,” he said.

The S450 skid steer loader can be supplied with a choice of 48 different product families of approved attachments – with more to come – which the company said provided “a perfect illustration of the Bobcat tool carrier concept common to all Bobcat compact loaders”.

Like the larger models, the S450 offers improved comfort and visibility to allow for greater control and accuracy in tight working spaces, it said, adding that for the first time in a skid steer loader model in this size class, the S450 loader was supplied with a fully-pressurised cab with air-conditioning as an option.

There is an increase in system pressure as well as changes to the hydraulic components, and hose and tube line routings. These have been designed to allow the use of straight fittings instead of adjustable fittings (45° or 90°). The number of hydraulic connections has also been reduced.

Bobcat’s new engines have been developed in conjunction with Doosan. Jose Cuadrado, vice president compact (EMEA), said this made sense as Doosan had long experience with producing engines.

Over the next 12 months, Bobcat is planning to release more details on its new Bobcat EU Stage IIIB and Stage IV compliant compact machines and their engines, which will be introduced in Europe in 2015.

The new E20 mini excavator that was previewed at the convention is not a model replacement – in fact, Bobcat said it was the first model not to have a competitor on the market. It is described as a zero tail-swing machine with a high level of stability. The first E20s will appear in the last quarter of this year.