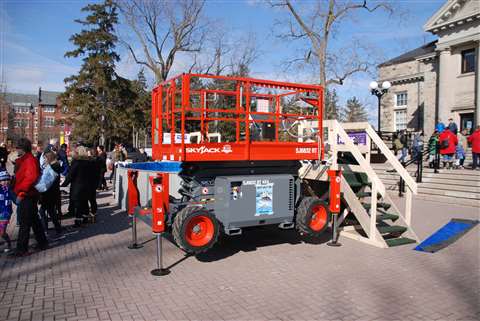 Skyjack donated a scissor lift for use during the Ontario Special Olympics recently.

“We had a donated pool for the event, platform and stairs to get in and out of the pool, but we needed a camera platform,” said Dominique O’Rourke who works in sponsorship and marketing of Special Olympics Ontario. “I was thrilled that Skyjack could help us in that area and show their support”.

Skyjack supplied a rough terrain scissor lift to be used as a camera platform as part of its 30 For 30 Partners campaign to celebrate its 30th anniversary.

On Feb. 6, attendees braved the cold and jumped into the icy waters at a pool set up on Johnson Green at the University of Guelph with the goal of raising more than $20,000 for Special Olympics Ontario 2016 Provincial Spring Games Special Olympics Ontario, a charitable organization that provides sports training and competition for people with an intellectual disabilities, works to enhance physical, social and psychological development through positive and successful experiences in sport. The 2016 spring games will be the largest in Special Olympics Ontario history with close to 1,000 athletes and coaches and more than 600 local volunteers.

In 2013, Special Olympics Ontario started hosting polar plunges in three cities to raise funds, since then the event has expanded to 11 cities. This is the City of Guelph’s first time participating in the event. Guelph’s Mayor, Cam Guthrie, Chief of Police Jeff DeRuyter and MP Lloyd Longfield all took the plunge.

With a working height of 32 feet (11.58 m) Skyjack’s SJ6832 RT rough terrain scissor lift worked from the platform for the camera to capture all the action. The scissor lift is drivable at full height with the 5-foot roll-out deck fully extended and features a platform width of 56 inches (1.42 m), overall capacity of 1,000 pounds (454 kg), and can accommodate up to four people on the platform.

“Guelph is where Skyjack is headquartered and where many of our employees live, so it was important for us to give back,” said Malcolm Early, vice president of marketing at Skyjack. “We were delighted to be a sponsor at this inaugural event. It’s great to see people come together to help an important cause.”

Skyjack’s 30 For 30 Partners campaign, celebrates the company’s three decade of success. Since Feb. 2015, Skyjack has supported 30 projects around the world from restoring a historic site in England, helping collect rare seeds in Canada to supporting a nonprofit in Singapore.