Skyjack has announced a range of upgrades to its telescopic and articulating boom range for 2020.

Most of the changes will be seen on 40ft and 60ft machines, which will now offer dual capacities. Depending on the model, capacities are increasing up to 1,000 pounds (454Kg), as are personnel ratings, up to three persons in the basket.

The nomenclature for these machines will feature a ‘+’ to identify the increased machine capacity, differentiating the new machines from their previous models.

Along with the increased capacities and personnel ratings, the new + models will also feature control system changes that better align with Eelevate, Skyjack’s telematics solution.

Adding dual capacities to the majority of booms follows the launch of SJ85 AJ, with dual capacity, earlier this year.

“We’ve gone one step further with these new booms,” said Corey Connolly, product manager at Skyjack. “Having a range with increased capacities together means that operators are able to more efficiently complete tasks across all kinds of applications.”

“The SJ63 AJ+ now features a class leading capacity rating of 660/1000 lbs (300/454 kg) – significantly greater than those offered by other manufacturers, with a three-person capability to full height.”

The booms also include longstanding Skyjack features, such as Easydrive - direction sensing drive and steer control; Axldrive, for  rough terrain traction; Skycoded control system; Skyriser, for true vertical rise without drifting; and Speedyreach, which allows the lowering of the fly boom to ground level for re-stocking without lowering the riser on the SJ63 and SJ85 articulating models. 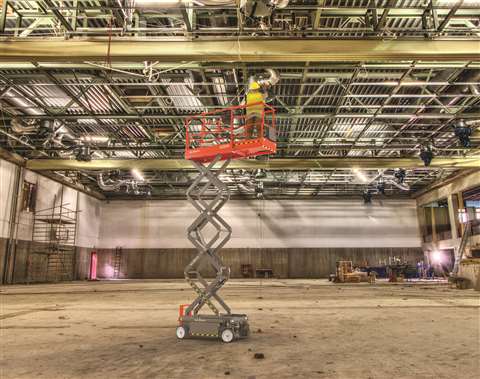 Skyjack’s DC scissor lifts have been significantly redesigned in 2020. The new DC line will feature a naming change to denote the new models – for example, the SJIII 3219 has been re-named SJ3219.

The improvements include the new Skycoded control system, providing on-board diagnostics, simplified troubleshooting and further enhances integration with Elevate. The wiring system is still colour-coded and numbered and is reinforced with a single control module that manages all machine functions, except for emergency lowering.

A visual display module on the inside of the hydraulic swing-out tray provides an easy to navigate interface for troubleshooting and outputs plain text and easily understood codes with no additional plug-in calibrators needed.

The DC scissor line, along with all Skyjack products feature new QR code markings. The QR code is an integral part of Elevate Live, which provides machine specific telematics data, as well as specific familiarization and documentation. Strictly relevant data like battery charging guide, battery life remaining, and active fault codes are provided to operators at the machine instantly.