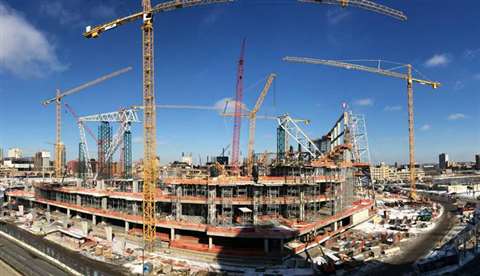 Skyjack will supply more than 200 units to the new stadium being built for the Minnesota Vikings, seen here.

Skyjack is supplying around 200 aerial work platforms to complete the new Minnesota Vikings stadium in Minneapolis.

“Construction on the stadium is just starting so we do not have all units on site yet but we anticipate having well over 200 by fall 2015,” said Don Beaupre, owner of Beaupre Aerial, the rental company working with subcontractors on the new Viking Stadium project.

Located in the heart of Minneapolis, the new glass-centric covered stadium will replace the Hubert H. Humphrey Metrodome, which was torn down in early 2014.

The nearly $1 billion new stadium will be home to the 52nd Super Bowl in 2018. It will be Minneapolis’ second time hosting the Super Bowl; the last time was in 1992 at the now demolished Metrodome.

“Our customers expect to rent Skyjacks because Skyjack equipment has made up the majority of our fleet since we started Beaupre Aerials. They, like us, appreciate the straight forward design and reliability of the equipment,” Beaupre said.

Beaupre Aerials has worked with both subcontractors on other stadium projects and have also used Skyjack equipment on those projects. For the new Viking Stadium construction project, the subcontractors selected SJIII 3219, SJIII 3226 and SJIII 4632 electric scissor lifts for their various working height and deck size to help with installations.

“Commonality of Skyjack parts allows us to carry a somewhat smaller inventory of parts both in our parts room at the shop as well as in our five mobile service vehicles,” Beaupre said. “Also, the commonality of electrical components allows an easier time of troubleshooting problems both in the shop and on a job site and means shorter down time for our customers.”

"Beaupre Aerial is a loyal Skyjack customer because of the quality, durability and reliability of the equipment,” Beaupre said. “Also, there has been no easier equipment manufacturer to work with since I have been in business.”