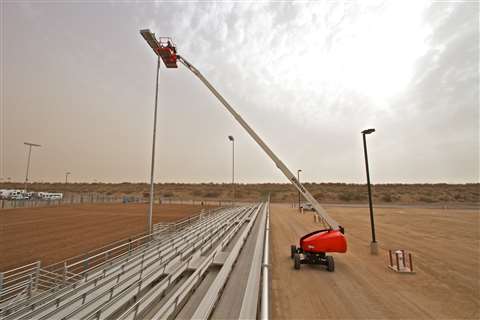 Snorkel has reduced tail swing on the new T66JRT

Snorkel has officially launched two new booms; the A62JRT and T66JRT. The company first displayed prototypes of both lifts at ConExpo 2011.

"The launch of the A62JRT and T66JRT continues the redevelopment and enhancement of Snorkel's mid-size boom lifts," said Richard Tindale, Snorkel's global sales and marketing director. "These machines combine Snorkel's renowned durability, reliability, ease of use and ease of service and repair with superior lift and drive performance."

The A62JRT replaces the Snorkel AB60JRT, offering improved drive and lift capabilities, including up-and-over clearance along with a 100 percent reduction in tail swing compared to the older model. Snorkel said this lift will excel in areas that include best-in-class maximum platform height at 61 feet, 8 inchess (18.8m) and up-and-over clearance at 29 feet, 6 inches (9.0m). Its platform cage measures 96 inches by 39 inches (2.4m x 1.0m) and when stowed for transport its length is 27 feet, 10 inches (8.5m).

Also new to the Snorkel A62JRT is an oscillating front axle with hydrostatic 4WD. Oscillation of the front axle it is controlled by a valve, which works to keep all four tires in contact with the ground. The axle remains in operation as long as the foot pedal is engaged, which means it's operational whether the machine is stowed or elevated.

The T66JRT is a 66 foot (20m) platform height, telescopic boom with a 6-foot (1.8m) jib and is also available without the jib, as the T60RT. These lifts replace the old Snorkel TB66JRT and TB60RT lifts.

They offer proportional control of drive, boom lift and lower, as well as continuous 360 degrees turntable rotation. The telescoping boom, platform and jib functions are infinitely controlled and variable through the use of toggle switches and a rheostat - with a reliable, simple and inexpensive repair solution. A new hydrostatic drive system provides higher system drive pressure, delivering higher torque to the wheels. The result for operator is improved power, gradeability and versatility.

Richard Tindale added: "By building our mid-size booms on a common chassis, they share many of the same components and structural weldments. Our customers benefit because they have to stock fewer spare parts. Furthermore, training their service engineers becomes much more straightforward."

The A62JRT and T66JRT will be on display at the Lift & Access Showcase & Symposium on Nov. 8-9 in Scottsdale, AZ. Snorkel expects to deliver the first field evaluation units in the first quarter of 2012, followed by full production in the summer.