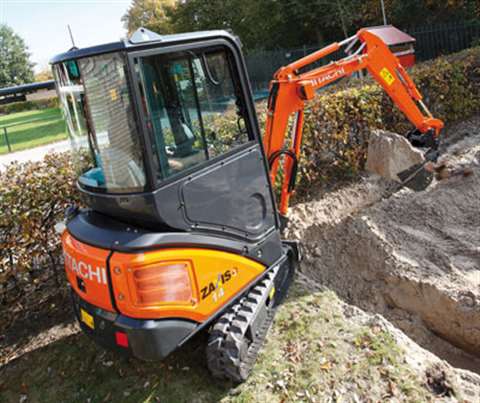 Hitachi will use Intermat to fill a gap in its 1 to2 tonne class mini excavator range with the launch of the 1,5 tonne ZX14-3. Described as a "basic, no-nonsense model that is extremely easy to operate" the ZX14-3 uses a three-cylinder 10,7 kW engine and a large 22 l capacity fuel tank to increase operating time. Operating weights range from 1,46 tonnes to 1,57 tonnes.

In other sectors, Hitachi will show the new ZW140 and ZW150 wheeled loaders first seen at Samoter in Spring last year, but genuine Intermat launches will otherwise be limited to new demolition attachments for its excavators and two new material handling units.

The long reach demolition booms will be available for use on four Zaxis-3 excavators, the ZX250LCH-3, the ZX350LC-3, the ZX870LCH-3 and the ZX470LCH-3. The latter will be on show in Paris. The base machines are built in Japan before being modified with the special booms at Hitachi's special application factory at Oosterhout in the Netherlands. Each model can be ordered with a high-reach, standard or two-piece boom, the latter being suitable for lifting heavier work tools.

The new material handling units, meanwhile, are the ZX250W-3 and the ZX360W-3, which join four other ZX models in Hitachi's material handling line up. The two new machines have been available in Japan and are now being shown in Europe for the first time.

As with the demolition units, the base machine comes from Japan with Oosterhout fitting the boom and arm as well as additional options such as cab lights and rotating lamps. Hitachi says that other options, including a wide undercarriage and more front attachments, will be available later this year.