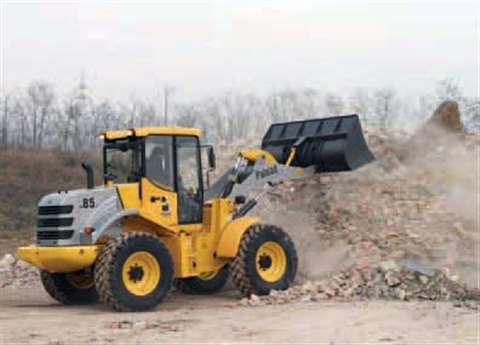 Palazzani will be showing a new wheeled loader, with telescopic boom, the 6 tonne PT 62, which takes its range to nine machines (38 to 97 kW).

Advanced visitor registrations for samoter 2005 have already exceeded the number of pre-registrations for the 2002 and 1999 shows, suggesting that this year could be the exhibition's biggest yet. Almost 1000 exhibitors are currently making the final finishing touches to their stands, which will cover a total of 1,5 million m2, and many have just announced plans to launch new equipment at the event.

Most of the major earthmoving manufacturers have already announced the products to be found on their stands, however, there are still some additions to the sector.

Italian-based manufacturer Palazzani Industrie will be launching its new wheeled loader with telescopic boom, the PT 62 (46 to 63 kW) at Samoter. The 6 tonne machine features a double-telescopic boom. Maximum bucket capacity is 1,5 m3 while maximum reach height is 4,5 m. It is equipped with a double hydraulic compensation system, which aids quick and simple operation with forks or bucket.

Palfinger will give Italian debuts to its latest four compact crane models, the PK 2200, PK 3200, PK 4100 and the PK 2700 Compact. All four models have a new design that dispenses with hose ducts and routes oil internally in the cylinders. Working pressure of all four cranes is 200 bar, a reduction on other Palfinger models, and something that the company says can significantly increase the working life of the crane.

The E 120 Z96 from the Epsilon range of timber and recycling cranes and the complete range of attachments for all crane products completes Palfinger's display.

Italian manufacturer Locatelli will use Samoter to display the new 60 tonne capacity Gril 8600T rough terrain crane for the first time. The crane has a four-section 32 m boom and can be fitted with a 17 m lattice extension. Other features include four-wheel drive and steer, heavy duty axles and a new cabin.

Power is supplied by a 224 kW Caterpillar six-cylinder turbocharged diesel engine. Other cranes on display will be the ATC 20 city crane and the Gril 8500T rough terrain crane.

Cormach will show its newest crane models from the last year and unveil new models at the SAIE exhibition in Bologna in October. The machines on show at Samoter will be the 125000 E and the 125000 E9F186 from the company's range of articulated loader cranes and the M 1650 recovery crane.

On display from Hydrocontrol will be the company's full range of monoblock and sectional valves for cranes. The Italian company will use Samoter to also exhibit the rest of its product range, which it says meets the needs of OEMs around the world.

The show will see around 20 access companies exhibiting, including many of the major Italian manufacturers, including Palazzani, Airo Tigieffe, CTE, Maber, OP Pagliero and Italmec. Absentees include JLG – which has decided that SAIE will suffice for its Italian shows this year – and Iteco, which will focus its new launches at the SAIE and APEX events. Oil & Steel and Basket are other prominent Italian manufacturers not attending.

The company is in the process of integrating the Palfinger and recently acquired Bison truck mounted ranges. The 13 m, 17 m and 20 m Palfinger truck mounts will be retained – replacing the 16 m, 18 m and 20 m Bison machines – with The ER47 clamshell bucket for cranes is being launched at Samoter by Italian manufacturer Rozzi.

Palazzani Industrie's Palift aerial work platforms division will be showing a variety of products, including nine TSJ models, from 19 to 48 m lift height, with multi-telescopic boom and articulated upper jib.

Most of the access manufacturers are to be found in the outside areas – predominantly Area C, but also Areas B and D. Some access exhibitors, like Hinowa, you will find in the indoor exhibition halls.

The new TCD 2012 / 2013 series of diesel engines will be launched by Deutz at the show. The engines have been developed to comply with Stage IIIA of European emission regulations and the manufacturer says that noise reductions of up to 3 dB(A) are achieved with the new models.

The existing characteristics of the phase II series 2012 / 1013 have been largely carried over; there are several gear-driven power takeoffs. Up to 100 % of the engine power can be taken off at both ends of the crankshaft. A V-belt drive is supplied as standard for front-end accessories. An alternative low maintenance poly-V belt is also available.

Lombardini will be showing three new models in its FOCS Plus range of liquid-cooled diesel engines. A new combustion system means the engines are environmentally friendly, provide better performance, are less noisy, with lower fuel consumption. A new piston and cooling design has reduced oil changes to 500 hours of operation.

Also new is the 15 LD single-cylinder diesel engines series (0,23 to 0,51 l). They are especially designed for vibrating plates and generators, says the company, because they provide high performance, reduced emissions and consumption, lower levels of noise and vibrations, immediate starting and great reliability.

Dana will be showcasing a variety of Spicer drivetrain components and systems at Samoter. It will also display examples of its complete systems capabilities for off-highway vehicles including telescopic handlers, wheeled excavators, wheeled loader, compact wheeled loaders, haulers, pavers, scrapers, and backhoe loaders, in addition to a variety of Spicer axles, transmissions, brakes, electronic controls, driveshafts and related components.

Extec Screens and Crushers will be showing a range of new machines at Samoter. Making its European debut will be the E-7, a heavy-duty track mounted self-propelled open flow screening and stockpiling system, purpose built for the recycling and quarrying markets.

Also on display will be the companies popular C-Series of tracked jaw crushers The C-Series feature a vibratory feeder with automatic control, which Locatelli's new Gril 8600T rough terrain crane, complete with 32 m boom, will be launched at Samoter.

Regulates the feed into the crusher, a hydraulic adjustment system to regulate the product size to be crushed and a reverse crushing action to assist in clearing blockages.

The company will also be showing its mobile screening system, the S-Series. Models on display will include the S-5 and S-4 Doublescreen. The newest machine in the range, the S-3, is a single screen-box screener designed for the quarry and recycling sectors.

Wirth will be showing several case studies and a model EPB (Earth Pressure Balance) TBM on its stand. The actual machine will soon be working on the Collagemento Ferroviario – Saronno-Malpensa – Galleria a Foro Cieco Castellanza railway tunnel near Milan.

Also on display will be the 44 m telescopic flat bed extendable semi-trailer (pictured on page 28), which has been designed for the transportation of long and indivisible pieces of prefabricated material.

A new range of stabiliser pads will be exhibited by Ferrari International 2. Dubbed the Conic range, the pads are designed to be attached to a slot inside the crane's stabiliser. Once attached, further manual positioning is unnecessary.

Other products from Ferrari International 2's range of grabs, rotators, pallet forks and baskets will also be on display.

The ER47 electro-hydraulic clamshell bucket is being launched at Samoter by Rozzi. The company says the new bucket has a capacity of 23 m3 and will be shown alongside the company's existing product line.

KTR will exhibit its Raden-Xrange of laminated steel couplings, which it says are ideally suited a wide range of applications, including use in the wind power industry.

KTR also now offers an optimised laminate bolting for all sizes above 160 mm where several small DIN cap screws take over the function of one big nut. This bolting allows large bolts to be tightened with standard tools as the tightening torque of cap screws is only 60 Nm.

Italian manufacturer Rulli Rulmeca will be showing a range of products for belt conveyors including Rulmeca rollers PSV-series, Fixed Stations with rollers and Garland Stations, which all conform to ATEX 94/9/EC Directive. Rulmeca Motorized Pulleys, manufactured by the German Daughter Company Rulmeca FAA, will also be be on show at the company's stand.