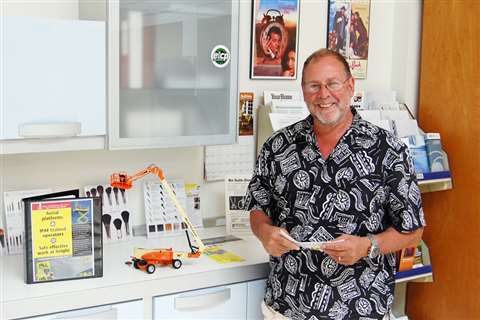 “Safety is an attitude” is more than just an expression to Dennis de la Mata (pictured), training and safety officer of Motion Picture Studio Mechanics Local 476 of the International Alliance of Theat

Union members are involved in a wide variety of crafts from electricians and carpenters, to grips, props and others. Some positions require training in a number of areas and de la Mata is working to develop or locate sources for proper training programs in each. Prior to the Construction Safety show, more than 200 union members had gone through various aerial platform training programs, but de la Mata felt the AWPT program was better and wanted the union members to receive Powered Access License (PAL) cards.

" It was an 8-hour program that included both hands-on and classroom sessions. And it was intense," de la Mata said. "After years of experience using them, we thought we knew everything about operating a lift, but we learned a lot of things in the AWPT program that we didn't know. We can take that back to our jobs and help make it a safer place to work. It was well worth the time."

More than 30 Studio Mechanics Union members have received their PAL Cards through NES Rentals. "Our goal is to have over 200 members trained within the next 2 years," said de la Mata. "And if we find more people who need training in the safe operation of aerials, we'll train them too," he added.