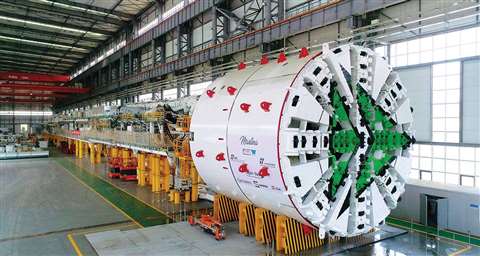 A tunnel boring machine (TBM) called Martina has broken ground to signal the start of the Brescia-Verona high-speed rail project in northern Italy.

The TBM, manufactured by China Railway Engineering Equipment Group (CREG) – and the first ever to be exported to Europe by the company – will bore a 7.95km dual-bore tunnel from Lonato del Garda to Desenzano del Garda, a significant (and the most complex) element of the 48km line.

It is expected that the geology on route will comprise mainly silt and cobblesone, but boulders are also commonly found in the area, which also hosts glacial sediments. For this reason, CREG designed a 10.03m diameter, 150m-long earth pressure balance (EPB) TBM, weighing in at an impressive 1,800 tonnes.

The TBM boasts a series of twin-screw conveyors, operating in single-screw mode where water and earth pressure is less than 2 bar or below and switching to twin-screw mode in response to higher pressures.

Along the route, two further tunnels will be constructed: the 3.36km Frassino tunnel and 3.7km San Giorgio tunnel.

Once completed, in 2023, trains, which will be electrified at 2x25kV and fitted with the level 2 European Train Control System, will be able to reach a maximum speed of 300km/h.

The main contract for the project was awarded to the Cepav Due consortium, comprising Saipem (59%), Impresa Pizzarotti (27%) and ICM Group (14%).

The Italian government is reported to be investing approximately €2.5 billion in the project, with the Cepav Due contract valued at €2.16 billion.