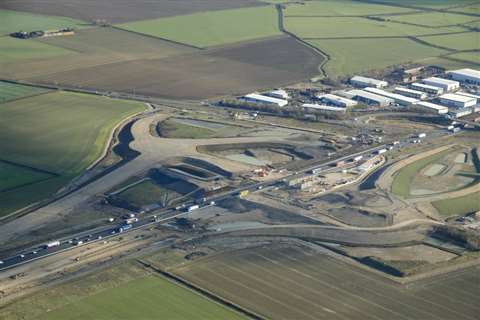 The redesigned Swavesey junction of the A14

A joint venture partnership of Balfour Beatty, Costain and Skanska have completed the UK’s largest road upgrade project six months ahead of schedule.

Work started on the A14, running between the East of England and the Midlands in November 2016 and was due to end at the end of this year. However, with work already completed on the €1.8 billion project, the road is now set to open in the spring.

Balfour Beatty credited the use of innovative and sustainable construction methods for the project’s rapid progress and on-budget delivery.

Balfour Beatty added that, in line with the team’s commitment to sustainability, the project reduced its environmental impact by planting over 900,000 trees, using local materials and recycling excess soil for use on nearby embankments.

Jim O’Sullivan, CEO of Highways England, which developed the project, said, “The A14 is a vital route used by 85,000 drivers every day and including more than 21,000 hauliers transporting essential goods around the country.

“Opening this scheme more than six months early and on budget shows what the UK construction industry can achieve working with Highways England on the Strategic Road Network. I would like to thank them for their focus on our joint success and for their one team approach.”

Since it first broke ground, the joint venture project has attracted much praise in the UK, as a trailblazer for future construction methods. It is considered an ‘ultra site’ - a beacon of best practice - and features as part of the Considerate Constructors Scheme, partly due to its efforts at community engagement.

The delivery team has also, over the course of the project, established 18 new wildlife habitats ranging over some 270 hectares.