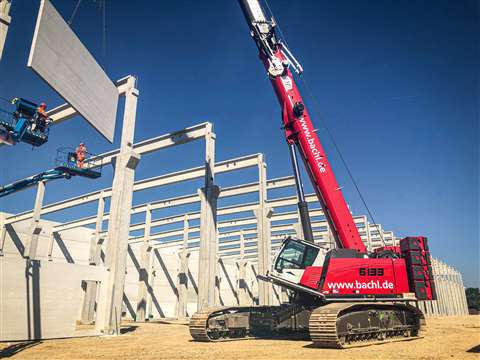 The 130 tonne capacity Sennebogen 6133 E was put to work on the construction of VGP Park. The 700,000 square metre site will have buildings of almost 400,000 m² for logistics, production and office space, for BMW, Krauss Maffei and others. It is under construction at the northern Parsdorf junction of the A94 main road.

Last year Bachl was looking to replace a 100 tonne capacity wheeled mobile crane with 22,000 operating hours. Robert Blöchl, senior project manager, takes up the story, “We were looking for a powerful crane that could move our components flexibly during the prefabricated assembly on the construction site. But it should also have compact dimensions, as we often have limited space on site. What was also important for us: that we could move the crane easily and cost-effectively from one construction site to the next. These points were all given with the 6133 E.”

After the handover of the crane at the Sennebogen factory in Straubing, its operator Alfred Kempinger took it to the VGP Park site and put it to work in June. Tasks include assembly of the reinforced and prestressed concrete prefabricated parts. In a construction period of just seven months it is planned to lift a total of 2,700 elements and to install more than 20,000 m² of ceiling systems.

Time pressure was not the only challenge. Karl Bachl specialises in interdisciplinary construction projects ranging from single-family homes to operational, administrative and production buildings, as well as logistics centres. A broad spectrum of competencies is required but the scale of this project made it a different animal.

Robert Blöchl explained, “For our precast construction division, this is the largest single contract we have ever handled, so the scale of the project and the volume in general is a challenge for us. The same applies to the floor space: the hall has over 60,000 m², so it was clear that we definitely needed a telescopic crawler crane in order to have as few moving operations as possible and to remain flexible. This in connection with the construction time – the assembly of the hall should be completed by mid-November 2020 – is the special challenge for us.”

To build the halls the telescopic crawler crane lifts and moves the columns, wall panels, cross beams, frost barriers and girders. The largest components are 32 metres long and weigh almost 35 tonnes. There are around 400 support stanchions, 18 metres long and weighing up to 26 tonnes.

Blöchl explains what is required, “For jobs such as halls or logistics halls, the most important thing is to be flexible on the construction site, in other words, there is no way around a telescopic crawler crane. On the one hand because of the large area, on the other hand also for logistical reasons. If, for example, the delivery of certain components is delayed or the assembly sequence is changed, the 6133 E can be easily moved thanks to the crawler tracks, and in no time at all it is at another location where work can continue. Thus, a telescopic crawler crane is actually indispensable for such construction sites.” 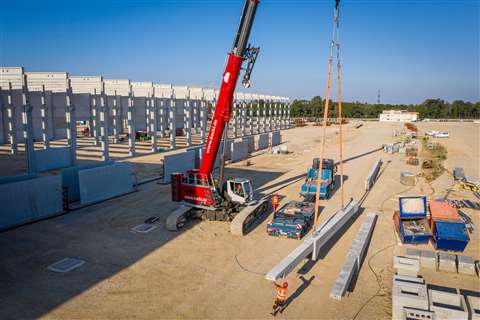 The Sennebogen 6133 E unloading columns up to 18 metres long. The 6133 E has a 52 metre main boom in six sections. A hook height of 67 metres can be achieved with the optional 15 metre fly jib