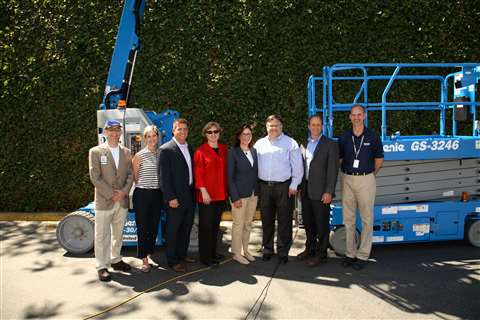 Terex Aerial Work Platforms (AWP) recently hosted an “I Make America” event at its Redmond, WA facility to showcase how manufacturers contribute to their surrounding communities and the national economy.

Congresswoman DelBene addressed a group of Terex AWP team members with, “You can’t ‘Make America’ without making smart investments in an efficient and functioning infrastructure system. I believe our national infrastructure is the backbone of our economy and investing in infrastructure is among the most effective ways to create jobs. For every $1 billion we spend on new transportation, energy, and water infrastructure projects, we create tens of thousands of good-paying jobs.”

“The visit from the ‘I Make America’ team and our VIP guests coincided nicely with an end of quarter celebration for our team members in Redmond,” said Karen Stash, senior director, global marketing and product management, Terex AWP. “We enjoyed a bbq and team members learned how their individual contributions at work make a direct impact on improving the nation. They, in essence, are ‘making America.’”

“I Make America” is a nationwide campaign organized by AEM to call attention to the contributions of companies and engage their employees in telling those stories to elected leaders to help convey the importance of public policies in keeping manufacturing strong. "I Make America" and its 40,000 supporters advocate for pro-manufacturing solutions like passing a long-term highway bill and pro-manufacturing trade legislation.

According to AEM, about one in six private sector jobs in the U.S. depend on the manufacturing base.