Thames Tideway gets go ahead 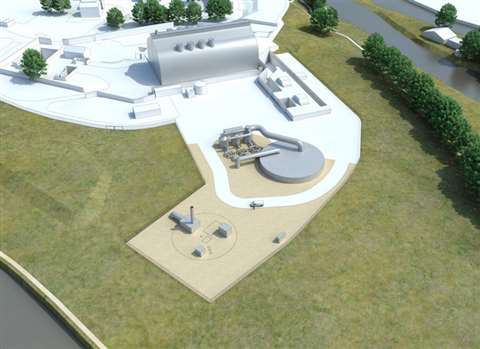 An artist's impression of the Abbey Mills Pumping Station

Construction of the new £4.2 billion (€5.75 billion) Super Sewer in London, UK, is set to start next year following the confirmation of independent investors to finance and deliver the scheme.

Bazalgette Tunnel, a new special-purpose company appointed to take the project forward, has received its licence from Ofwat (the Water Services Regulation Authority) as a new regulated utilities business, separate from Thames Water, the private utility company responsible for the public water supply and waste water in Greater London, the Thames Valley and other parts of the UK.

The winning contractors for the seven-year project to build the three tunnel sections were selected through a tender process run by Thames Water.

For the west tunnel, a joint venture of Bam Nuttall, Morgan Sindall and Balfour Beatty Group has been chosen. The £416 million (€569 million) 6km section of the 25km Thames Tideway Tunnel will run from Acton in West London to Wandsworth in South West London.

It will incorporate seven separate work sites along the route. Works will include design, construction, commissioning and maintenance for a two- to five-year period following construction completion.

The central project – the largest part of the project at £746 million (€1.02 billion) has gone to a joint venture of Ferrovial Agroman UK and Laing O’Rourke Construction. It will run from Fulham, South West London to Bermondsey in South East London.

The third, eastern tunnel will go as far as the Abbey Mills Pumping Station, where it will connect with the Lee Tunnel, with sewage being transferred to the Beckton Sewage Treatment Works to the east of the capital. The work on the eastern tunnel will be undertaken by a joint venture of Costain, Vinci Construction Grands Projets and Bachy Soletanche. The contract is worth €858 million.

Vinci said the works package included the construction of two sections of tunnel, a main tunnel at 5.5 km, and a connecting tunnel of 4.6 km for combined rainwater and wastewater to the east of London.

Located between 45m and 65m below ground, the two tunnels will be excavated using slurry pressure balance tunnel boring machines.

The eastern section also includes the construction of five large shafts with diameters of between 17m and 25m, maritime works on the Thames, structures connecting with the existing wastewater collection system and electromechanical works packages.

The system integration contract has been awarded to infrastructure support service provider Amey, which will be responsible for providing process control, communication equipment and software systems for operation, maintenance and reporting across the Thames Tideway Tunnel system.

Environment Secretary Elizabeth Truss said, “The Thames Tideway Tunnel will be a fantastic example of world leading British engineering at its best. It will also boost economic growth across the capital, generate more than 9,000 jobs and bring huge benefits to the natural environment by protecting the Thames from sewage.”