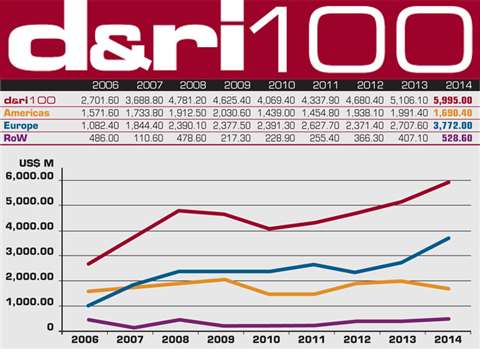 A year-on-year chart showing total turnover in US$ for companies featured in the D&amp;Ri100 listing

The surprising news contained in this year’s D&Ri100 is that the dominant hold that the American industry has historically had on the top spots has finally broken by European contractors in 2013. The top four positions were all held by US contractors last year, with the top 10 made up of five from that continent, four from Europe and one Australian contractor. This year, the position is very different, with only two US companies in the top ten, with seven coming from the European continent and an Australian outfit again rounding out the top 10. And the top two slots have now gone to European contractors with the highest placed US contractor coming in at number three.

At this point, I would add the usual caveat – in many cases, it is virtually impossible to separate out the core demolition and associated recycling activities from the general turnover figures available to us. Many contractors, and particularly the larger ones by turnover, are active in a number of different fields that are more or less related to the demolition sector itself, so the resulting table should be viewed with a degree of caution.

It also fair to say that currency exchange rates have favoured the European contractors, with both Sterling and the Euro currently relatively strong against the US Dollar (but not as strong as was the case in 2007 and 2008.

The overall total, at US5.995 billion, almost hits the US$6 billion barrier and is 18% up on the comparable figure for 2013 (2012 turnover) of US5.1061 billion. This is the single largest increase in recent years and confirms anecdotal evidence that the worst is indeed over for the industry.

Having said the above, 2014 has seen the demise of several larger players in the industry, such as the UK’s Lee Group and EDS, and Testa Corp in the USA. Add to this the fact that Great Lakes has announced the disposal of NASDI and Yankee Environmental to Dore & Associates (see news this issue) for a relatively modest US5.1 million, at first glance there appears to be less room for optimism over the substantial increase of the 2014 D&RI100 total. The turnover figure for NASDI for last year more than hints at the troubles affecting the Great Lakes demolition business and hence the background to their disposal – NASDI’s reported totals for 2013 fell by US$93.1 million from that reported for 2012, a drop of 80%.

Nevertheless, there certainly are positives to be taken. Nineteen companies are reported with turnovers in excess of US100 million, up from 12 who reported results of that scale last year. This year, the company at mid table is Spanish contractor Detecsa with a turnover of US$32.5 million – the corresponding figure from last year was TVF Altwert at US$28.4 million. Interestingly, Detecsa’s data also illustrates clearly that times still appear to be tough for the industry in southern Europe, with its turnover for the 2013 listing being more than double this year’s at US$76.4 million.

Of the contractors on the list, 64 are from Europe and 32 from the Americas, with the former contributing US$3,772 million, or 62.9%, of the overall figure and the latter delivering US$1,690, or 28.2%. The rest of the world contributed the balance of US$528 million, or 8.9%. However, several contractors from the latter region, such as Watanabe and Anhui, have dropped out of the list due to our inability to source numbers for them this time around. Nevertheless, these numbers reinforce the fact that there appears to have been a shift of power since last year’s listing had North American contractors contributing 39% against the European contribution of 53% (the rest of the world contributed 8%).

I would be the first to admit that the Japanese demolition industry is grossly underrepresented in the table and the fact that the two companies who have regularly featured are not included this year is disappointing, but sourcing information about the industry in that country is notoriously difficult, if not indeed impossible. There is no Japanese demolition association as such and even obtaining site reports from the country via our presence in the country has proved extremely difficult, to say the least,

The threshold for companies gaining a place on this year’s D&Ri100 stands at US$13.7 million - last year’s equivalent number was US$12.8 million, meaning a 7% increase.

The cumulative graph included in this report makes for interesting viewing, in that over the last eight years, the line has never dropped below the total D&Ri100 in 2007 (2006 turnover), despite the challenging economic conditions of the market. True, the line does dip in 2009 and the biggest dip of all occurred in 2010), but since that time there has been a steady climb upwards, with 2013 turnover up 18%, as stated above. While easily the greatest increase in some years, there is still a way to go to match the year that showed the greatest increase in total revenues, of 31%, that the industry saw in 2007 – that increase saw the D&Ri100 breach the US$4 billion barrier, whereas this year the D&Ri100 almost, but not quite, breached the US$6 billion barrier. Perhaps that will be for next year.

Two companies making their first appearance on the ranking have jumped straight in to high placements, with top marks going to Belgian outfit Wanty SA at 7, with US contractor MCM also making its first appearance at a creditable 13th place. Also new to the list, but just below the magic US$100 million mark, is German contractor Hegendorn at number 20 with a turnover just shy of US$96 million. Other notable newcomers include Russian contractor Raz-Max at 32, Australian Liberty Industrial at 41 and German contractor Moß at 49.

While there have been some negatives for the industry this year, the overall trend does appear to be upwards and a cautious degree of optimism is therefore realistic. It is reasonable to suppose that the D&Ri100 next year will definitely exceed the US$6 billion mark.

As was the case last year, considerable resources were devoted to encourage contractors around the world to supply basic financial data concerning their activities during 2013. Where we were unable to obtain information from companies themselves, independent financial reporting services were consulted to obtain the necessary data. D&Ri never makes use of even informed estimates in the compilation of the D&Ri100.

I have endeavoured to ensure the accuracy of the figures used in the creation of the D&Ri100 ranking of the world’s top demolition companies but KHL can accept no liability for any errors or inaccuracies relating to the individual turnover figures contained in this report.

I would like to encourage all companies that receive future requests for data for the D&Ri100 to respond, as the greater the level of response from contractors around the world, the more accurate and comprehensive future listings will be.

Data that was supplied to D&Ri in currencies other than the US Dollar were converted using the relevant exchange rates as of 2 May 2014.