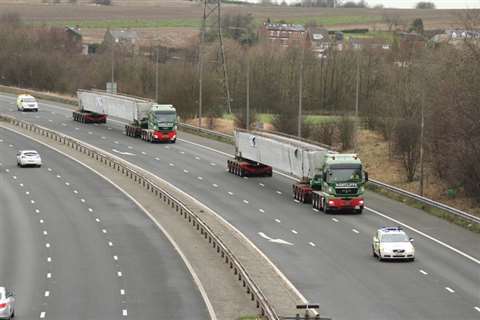 Transporting and installing a new concrete bridge from Ireland was a major part of a bid to resurrect an historic railway line in the UK, writes David Weston.

The 98 mile (104 km) twin track railway line from Edinburgh to Carlisle was constructed in two stages by the North British Railway before it became a part of the London North Eastern Railway (L.N.E.R). The first part opened in 1849 and the second in 1862. The line ran south from Edinburgh though Midlothian and the Scottish borders before heading for Carlisle. It was named the Waverley route after the novels of Sir Walter Scott.

This picturesque line was notable for its steep gradients and stunning scenery and it came as a great shock to many that it was marked for closure in the 1967 Beeching railway cuts, a cost reduction programme, which sparked a great deal of protest.

On 5 January 1969 the last scheduled passenger service used the Waverly line. Towards the end of the year contractors started to lift the tracks. Only parts of the railway line that were used to carry freight traffic survived the initial closures, although these too fell into disuse in 1972.

The Waverley route was one of the first railway lines in the country to be run as a private venture and it was one of the first attempts at preservation. It was hoped that this would save the line from closure. Following a long campaign to reinstate the line in June 2006 the Waverley Railway (Scotland) Act was passed by the Scottish Parliament by 114 votes to one. The Act meant that the line would be reopened as far south as Tweedbank, just south of Galashields. This was given Royal assent in July 2006.

Following tendering processes (that have since been abandoned) the line is now being built by Network Rail, which appointed BAM Nuttall to build the 30 mile (50 km) section. It has been estimated that the total cost of the project will be £350 million (US$ 500 million).

In February 2014 construction of a bridge, the largest new structure on the line, began. The rail bridge will span Hardengreen roundabout, between Eskbank and Newton Grange. It is the longest bridge to have been built from scratch for the new railway line and constitutes the most significant milestone in the line’s construction to date.

The new bridge is made up from four 107 tonne concrete beams that were cast in Ireland by Shay Murtagh Precast. Transport from Ireland to the construction site was provided by J. B. Rawcliffe and G. C. S. Johnson. Challenges during the transportation of the beams included stormy weather and cancellations of the ferry from Ireland across the Irish Sea. The conditions delayed the transport of the cargo by a day.

Fortunately a weather window appeared and the beams made the crossing in relatively calm weather, and were delivered to site on time. On arrival at the site a Liebherr LTM 11200-9.1 wheeled mobile telescopic crane from Mammoet was used to lift the bridge beams into position.

The project is due for completion in 2015.