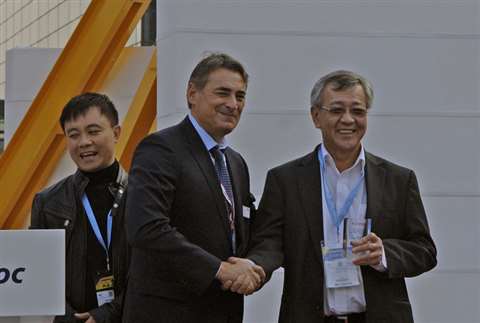 The Singapore-based company marked the addition of the GMK6300L models in a ceremony held during the Bauma China construction industry exhibition in Shanghai at the end of November. Tiong Woon Crane & Transport, 15th in the IC50 ranking of the world’s largest crane rental companies, now has 18 Groves in its fleet of more than 300 wheeled mobile and crawler cranes.

At the ceremony KH Ang, Tiong Woon chairman, commented, “Grove cranes are very popular units with our customers. When the Grove GMK6300L was launched in 2010 we could see that its onboard innovation gave it capabilities that other cranes didn’t have, particularly with its 80 metre boom. We watched the arrival of the first units in Asia with interest and quickly realised that this crane would be a great solution for many of our customers. It was only a matter of time until we ordered our own, and we saw such strong potential for the GMK6300L that we ordered five units.”

Grove has sold hundreds of units of its six-axle, 80 m boom GMK6300L since it was unveiled in IC magazine in April 2010. Tiong Woon’s other Groves include GMK3055 and GMK5095 all terrains and RT760E and RT890E rough terrains.