Based on the company’s 323 Dingo, the eDingo 500 has an operating capacity of 233kg and is powered by lithium-ion batteries. It was said to be designed specifically with rental in mind. The batteries, which can be recharged in eight hours, give the machine a travel speed of 2.75 mph (4.43 km/h) and delivers comparable power to combustion engines with 5.0-7.5kW power ratings, said Toro. Depending on how the machine is used, the batteries can last for a full 8-hour shift. 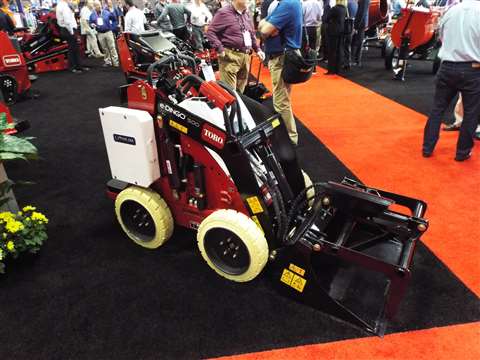 Anthony Nadalin, Senior Marketing Manager at Toro, said, “Listening to end users and channel partners, there is demand for electric. In part, it is also a response to public pressure to have environmental products. This is a trend across Toro’s range.”

He added, “North America is behind Europe in terms of environmental policy, but Toro doesn’t want to wait for legislation.”

Toro, which is already well established in the US rental market, is looking to tap into the European market; “For this, the e-Dingo is a flagship model,” Nadalin said.

The e-Dingo will be making its European debut at the IRE show in Maastricht, the Netherlands, between 9 and 11 June, 2020.

The e-Dingo was said to be good for indoor work, as well as outdoor jobs, and it was highlighted that the machine enhances health and safety because it eliminates the need for manual labour in tight indoor spaces.

Although there is a premium to be paid for the electric technology, it was suggested that rental companies can charge higher rates for the unit. There is also the benefit of lower maintenance costs due to fewer engine components.

The e-Dingo 500 will be available in the Spring.