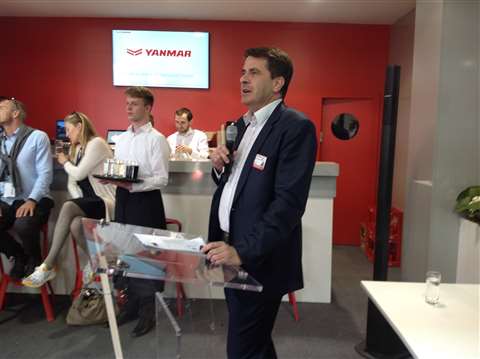 Yanmar president Jean-Marc Reynaud said the rental market was a key growth area for the manufacturer, which was focussing on total cost of ownership with its latest compact equipment launches.

In March, Finnish rental company Cramo signed an agreement to invest in 800 to 1000 Yanmar compact excavators over two years. Mr Reynaud said the company made this choice after several months of testing.

“Total cost of ownership is the key focus for the rental market and beyond,” Mr Reynaud said. “We are also a long-term supplier for other rental buyers such as Loxam, HKL, Kiloutou and many more. The first deals for Yanmar Europe were with rental companies.

“In the UK, we changed our approach to the market in 2013, and we have built a sustainable business model. It’s time to get back into UK rental, and we think we have a good product and service offering now for the rental companies here and we are seeing steady growth in this market too.”

The company launched its Sigma concept and the SV100 2-Piece Boom at the exhibition, among range of other new compact equipment introductions. The B7 Sigma-6 is an 8-ton zero tail midi-excavator fitted with a new boom concept on the European market: the Sigma concept.

The main characteristic of the Sigma concept is that the second articulation of the boom provides lateral movement of the arm and attachment without any rotation of the upper frame. This enables to increase the productivity of the machine and its working amplitude.

The specific design of the boom also improves the precision of the B7-6, particularly in areas where accessibility is limited. It also allows optimal visibility on the jobsites, according to Yanmar.