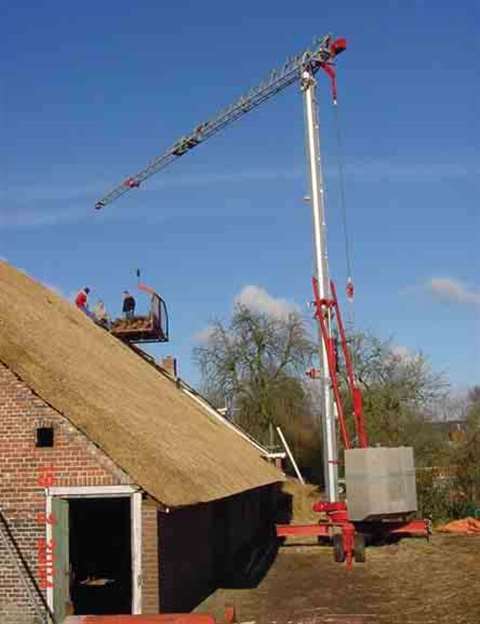 This mini self-erector is one of over 20 tower cranes rented by Monta-Rent in the Netherlands.

Jerry welford, sales manager at ladybird crane hire, which has a fleet of 34 potain self-erectors, said towers and telehandlers both have their place, but that the self-erector comes into its own on very compact sites where there isn't room to manoeuvre. The also said that self-erectors controlled remotely-with the operator able to stay in visual contact with the load-can be safer than the larger 17 and 19 m slewing telescopic handlers where visibility is sometimes an issue.

Richard blokker, one of three founding owners of monta-rent bouwlogistik-a specialist renter of self-erecting towers in the netherlands-said its fleet of over 20 self-erectors are often used on housing renovation projects where the crane can reach over an entire building, including a back garden. Monta-rent's cranes are also mobile, fitted with either a trailer chassis, a crawler or self-propelled, which makes them ideal for largeprojects where the cranes can move about on site its cranes have jib lengths of up to 28m and handle loads up to 2000 kg.

What will they cost? monta-rent's cranes are typically rented for two weeks or more, with its self-propelled 24 m jib crane costing around €750/week, rising to €1200/week for the crawler mounted version ladybird in the uk reports rental rates ofaround €1125/week for a mid-range model for longer-term rentals.