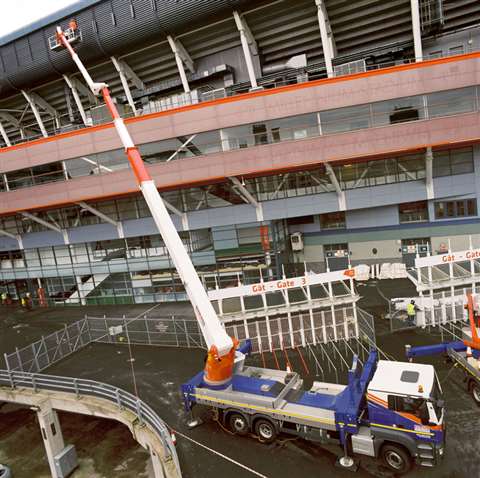 Wilson Access called up the largest truck mount in its fleet to help contractors rebrand the former Millennium Stadium in Cardiff – the home of Welsh rugby.

The 57m Palfinger P570 hired by John Anthony Signs is a new addition to the Wilson Access fleet. A second P570 will be joining the fleet in the coming months.

To reflect the name change, John Anthony Signs manufactured 26 illuminated letters 2.3m high spelling out the stadium’s new name and installed them 40m up on the exterior of the stadium.

As well as the 57m Palfinger, John Anthony Signs also hired a 45m Wumag WT450, together with two truck mount operators over seven days to install the new signage.

John Anthony Signs installation manager Kevin Knight said, “We were working to an extremely tight timescale and it was imperative that we completed our work before the official launch of the newly named Principality Stadium. The working height and versatility of the Wilson Access truck mounts gave our four-man installation team quick and easy access to help them keep to their deadline.”