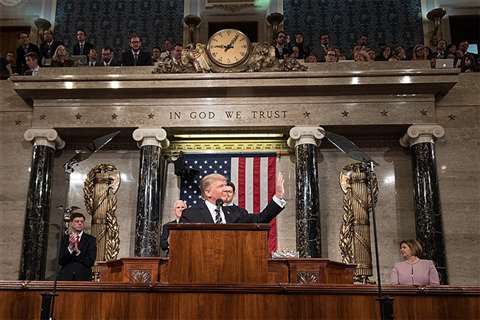 In his first State of the Union address, President Trump has asked Congress to produce new infrastructure legislation to provide, “at least $1.5 trillion” in total investment plus a cut in federal project permitting time to two years or less.

Trump said, “It is time to rebuild our crumbling infrastructure.” He added, “We will build gleaming new roads, bridges, highways, railways and waterways all across our land.”

The President’s plan would see Congress redirecting $200 billion of federal funds to Amtrak and transit programs over ten years, while calling for hundreds of millions more to come from cities, states and the private sector. President Trump stated the importance of ‘tapping into’ private sector investment to help fix the infrastructure deficit.

Sandherr said, “Finding a way to make decisions in months, instead of years - while still holding projects to a high standard for approval - will save taxpayers billions, restore public confidence in our ability to invest wisely and continue to protect the environment.”

Despite his positive comments about infrastructure, many in the construction industry are waiting to hear more details. There are concerns that the plan involves taking money from existing transportation programmes to pay for infrastructure plan and that more rural areas of the country could struggle to attract private investment.