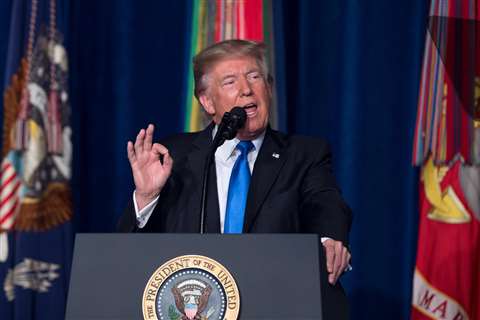 Trump proposes unprecedented infrastructure spend for the US 2021 budget, but funding for it remains unclear

President Donald Trump has proposed a US$1 trillion, ten-year infrastructure plan. However, it is currently unclear where the revenue will come from.

The president’s fiscal year 2021 budget request, including the ambitious infrastructure plan, was unveiled on February 10, following vocal support from construction professionals over his comments about America’s infrastructure in his State of the Union speech on February 4.

According to the White House fact sheet, the proposed infrastructure investment has two major components. The first is an US$810 billion, ten-year reauthorisation of surface transportation programs. The second is an additional US$190 billion in investments across a range of infrastructure sectors, including water and broadband.

The budget also includes US$6.5 billion for a Public Lands Infrastructure Fund. This program would address the deferred maintenance backlog in America’s national parks, forests, wildlife refuges and other public lands, along with Bureau of Indian Education schools.

In his speech to the nation, President Trump called for both political parties to put aside politics and pass a highway infrastructure bill, a sentiment roundly praised by American contractors and equipment dealers.

“Both parties should be able to unite for a great rebuilding of America’s crumbling infrastructure,” said President Trump. “I know that Congress is eager to pass an infrastructure bill, and I am eager to work with you on legislation to deliver new and important infrastructure investment, including investments in the cutting-edge industries of the future. This is not an option. This is a necessity.”

Dan Buckley, chairman of the National Utility Contractors Association (NUCA), said, “President Trump recognises that even in a contentious election year, modernising our nation’s obsolete infrastructure is an issue both parties can agree to finish.”

“Make no mistake about it, the future of economic growth, quality of life and international competitiveness in the United States hinges on providing long-term investments to rebuild our nation’s decrepit infrastructure,” he said.

“AED calls on Congress and the administration to … work in a bipartisan, bicameral manner to provide the resources necessary to rebuild America. The time has come for both parties to stop kicking the can down the road and work together on real infrastructure funding options.”

Serious questions remain about how to pay for any final bill, with neither party yet providing a set of funding solutions that address long-term infrastructure requirements.