Twin STS cranes delivered at once

A pair of fully assembled ship-to-shore container cranes was delivered on one vessel by Jumbo Shipping in a first-of-its-kind operation.

A pair of fully assembled ship-to-shore container cranes was delivered on one vessel by Jumbo Shipping in a first-of-its-kind operation. 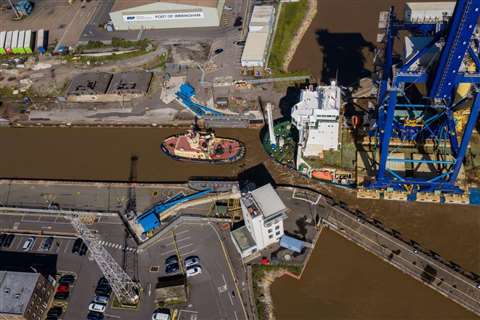 Fairpartner turning into Immingham locks with the STS cranes onboard

The two cranes, together weighing more than 1,500 tonnes, were shipped from Taicang in China to the Port of Immingham, on the north east coast of the UK. It was the first time two STS cranes this large have been transported at the same time on one heavy lift vessel. The cranes were made by Nanhua International and were delivered to their final destination at the Port of Immingham operated by Associated British Ports.

Jumbo selected its J-class heavy lift vessel Fairpartner for the job. One crane weighed 788 tonnes and the other 810 tonnes. They stood just under 75 metres above deck. An issue was to accommodate their large footprint, which required some innovative thinking.

It began with the loading. “We used the vessel’s own deck-mounted cranes to lift the first container crane onto temporary rails placed in the middle of the deck,” explained Otto Savenije, Jumbo senior project engineer. “We then moved the container crane forward to its stowage position behind the ship’s accommodation.”

To achieve it, however, Jumbo had to widen the portside of the deck, using the vessel’s own tweendecks as deck extensions. “This created the additional 6.1 metres necessary to hold the rails. However, to offset that extra weight on the portside, we had to position a 100 tonne counterweight on the starboard side during lifting operations,” Savenije explained.

Loading the second crane into its mid-ship position was easier, Jumbo said.

Another tricky part of the operation was on arrival in the UK. Access to the Port of Immingham is via a lock 26.8 metres wide. Overhanging deck extensions and the protruding crane jibs presented a challenge. Jumbo tilted the jibs up on the STS cranes and ran the lock at high tide. “After changing our ballast configuration to stabilise the effect of raising the jibs, this meant that we could pass the locks safely, without risking collision with things like buildings, bollards or lampposts on the quayside,” Savenije explained.

Horizontal clearance to the lock wall as the vessel passed through was 600 mm and the deck extensions were 3 metres above the quay.

A video showing the passage of Jumbo’s Fairpartner through Immingham locks can be seen here. 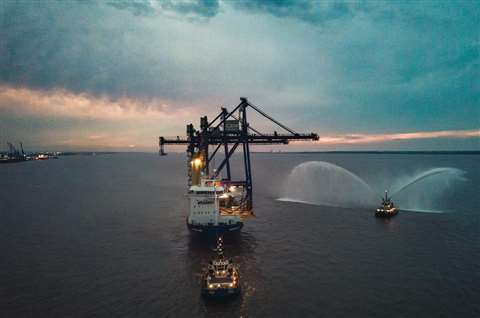 Fairpartner arrives at the Port of Immingham in the UK

AEM’s Dennis Slater retiring, Megan Tanel to succeed as president
Changes to become effective at the end of the year
Latest News