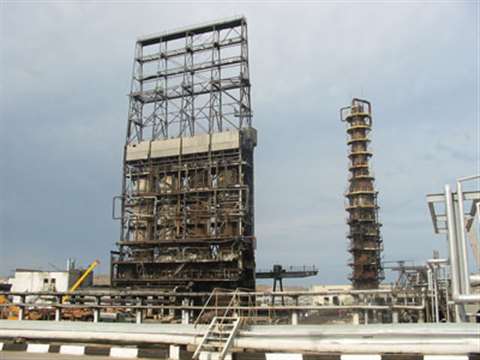 The demolition of two delayed coker units at a refinery near Turkmebashi, Turkmenistan, required expert advice from RVA

RVA Group - a leading UK expert in large-scale decommissioning, decontamination, dismantling and demolition project management - is preparing for a period of controlled growth in 2011 following a record-breaking 12 months' performance.

The company, which has enjoyed year-on-year expansion since its formation in 1992, saw turnover increase by 15% from 2009 to 2010. Much of the new work is being driven by RVA's growing international presence, with organisations from around the world turning to the company for help when decommissioning major industrial processing sites.

RVA's managing director Richard Vann explained: "Many large, complex, high-hazard installations worldwide are now reaching their end of life. This challenging area of work remains inherently high-risk so the need for our specialist engineering support in the UK and overseas is paramount."

Having now completed in excess of 500 projects - including some of the largest process plant decommissioning assignments this country has ever seen and in locations as challenging as Turkmenistan - RVA has worked with many internationally renowned blue-chip organisations such as GlaxoSmithKline, BASF, Ineos, GrowHow, CIBA and ConocoPhillips.

In 2010, RVA's expertise was called upon to provide project management assistance and technical guidance for a 7 hectare Portuguese power plant decommissioning project. In January the team was appointed to provide specialist demolition and safety expertise to support the clearance of a cement works in Cyprus, and now - as its overseas reputation continues to grow - RVA is receiving further enquiries from countries across Europe, including the Netherlands, France and Germany.

Whilst RVA is looking forward to taking on new international projects, the expansion will be steady and controlled in order to maintain the company's exemplary EHS (environment, health and safety) record. RVA will also remain committed to providing an independent, tailored service with bespoke recommendations for every client, taking into account each project's unique factors and requirements.

To support the projected growth, two new specialist project managers have been recruited to join the company's existing team, with further expansion of RVA's skill-set planned for this year.

"RVA has become well established as a UK market leader in the technically challenging field of decommissioning consultancy services, and we anticipate that projects within this country will remain integral to our business model going forward. However with the increased number of large-scale industrial site closures occurring across the globe, we are now ready to achieve our long-term strategy to become a market leader on the international stage too," concluded Richard.