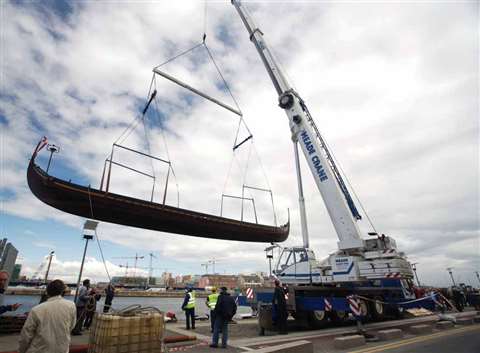 The Sea Stallion from Glendalough, is a replica of the 30 m long Skuldelev 2 built around 1042 in Dublin. After the replica was constructed, it was transported to Roskilde, Denmark from where it retraced the famous voyage made by Sea Stallion to Ireland centuries ago.

Hundreds of spectators gathered to witness the Sea Stallion arrive at Hanover Quay in Dublin where Meade began its first task of removing the ballast and masts from the ship before lifting it out of the water. The 130 tonne capacity Grove GMK5130 was rigged with 50.6 m of main boom and 23.5 tonnes of counterweight.

All lifts were made using two Modulift 70 spreaders to ensure an even and safe spread of lifting points along the narrow but lengthy vessel. “Due to the age of the Sea Stallion, one of the main priorities when organising the logistics of the multiple lifts involved was to ensure a minimal amount of stress and strain was placed on the vessel throughout the operation,” Fergus Meade explains.

The Modulift 70 offers a span capability of up to 12 m in 500 mm increments and has a maximum load capacity of 70 tonnes at 9 m span.

With the ballast and masts removed, the vessel was lifted out of the water, allowing the crew to pump out excess water, which reduced its weight from 14 to 13 tonnes. Sea Stallion was then lifted on to a Nooteboom three axle extending low-loader trailer, ready for transport.

Before moving the ship to Collins Barracks, Sean Meade & Sons waited until 11 pm that night to avoid traffic congestion. After a 30 minute journey the load arrived at its second lifting point, Croppie Arce, in front of Collins Barracks. The gates there were too small for the Stallion to pass through so the GMK5130 lifted it into the Croppie Arce compound for reloading on to the trailer. The crane used 40.1 tonnes of counterweight and 45.8 m of boom.

Once it was back on the trailer, Sea Stallion was manoeuvred to the end of Croppie Arce and lifted into Collins Barracks using a 200 tonne capacity Terex Demag AC 200-1 crane, but then it had to be moved into the courtyard, which was surrounded by buildings on all sides.

For this Meade chose a Grove GMK6300, with 100 tonnes of counterweight, a 23 m main boom and 45 m luffing jib. It hoisted the ship high over the surrounding buildings and safely into the courtyard.

The Sea Stallion from Glendalough will be on display at the Museum of Ireland until mid-2008.