Turkey-based Up Makine has supplied nearly all the powered access equipment used at the Istanbul New Airport project, Turkey. As the main supplier of MEWPs, Up Makine signed the contract in 2016 and it remains valid until the project finishes.

Up Makine won the 2018 International Awards for Powered Access (IAPA) Project of the Year award for its work at the airport.

The airport will have three terminals, six runways, and an annual capacity of up to 200 million passengers. The first terminal will be the biggest terminal building under one roof in the world, extending over an area of 1.3 million square metres and initially serving 90 million passengers each year.

The New Airport Project started on 1 May 2015 and is being constructed over an area of 76.5 million square metres on the European side of Istanbul between Tayakadın and Akpınar villages, along the Black Sea coast. The construction of the first phase of the project will be completed in 2018 and opened for use. The main constructer is a consortium named as İGA. 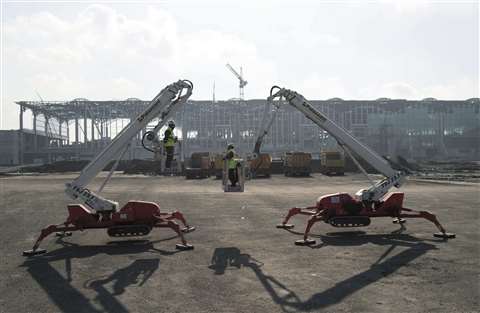