Upbeat forecasts from The Rental Show 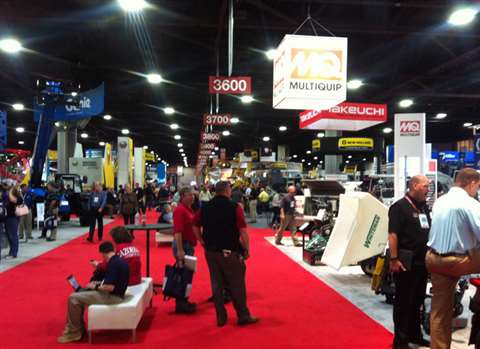 The Rental Show 2016 - a review from this year's exhibition in Atlanta, Georgia.

This year’s edition of The Rental Show, held from 22 to 25 February in Atlanta, US, saw a wide range of products showcased, together with generally upbeat forecasts on prospects for the equipment rental market.

The show kicked off with the American Rental Association (which organises the exhibition) issuing its latest forecast for the US rental market - 6.6% market growth is expected 2016 followed by 5.6% growth in 2017, with the industry reaching a value of US$53.7 billion (€48.8 billion) by 2019.

IRN caught up with John Bureau, for instance – general manager of software company Wynne Systems. The end of last year saw Wynne acquire Result Group, expanding its customer base to include specialist rental and construction companies.

Mr Bureau explained that the company had also divided into two distinct groups in 2015 – Wynne, offering premium products to national and multi-national rental companies, and Intempo, which targets local and independent regional rental operators across the equipment, tool, event and specialty industries in North America.

“We’ve seen a lot of interest across the board at the show. The larger corporates have needs which are completely different from the smaller, mom & pop organisations,” Mr Bureau said. “We then bought Result Group, which allowed us to enter the UK market. Now our strategy is to target the top 100 Tier One equipment rental companies in the UK.

“From a parent company perspective, further growth by acquisition makes sense. We are also looking closely at the day-to-day problems that rental companies face and working on developing solutions – for instance we now offer electronic signatures with every contract."

Mr Bureau said the company was always considering the applications of equipment and how it could help customers go back to basics to boost utilisation. One piece of equipment can have over 100 different applications, he pointed out.

“The pace of our industry is changing, and adoption of fleet management and enterprise resource planning software is increasing. Take mobile apps to manage your business, for instance – now they’re a way of life, whereas people couldn’t imagine this five years ago.”

Meanwhile, Mark Hanson, vice president of sales at manufacturer Generac, said the company had seen high quality visitors to its stand at the show. “The larger rental companies as well as the independent businesses are all represented at The Rental Show, and we’ve seen solid attendance,” he said.

“We think the underlying market factors are strong and positive in North America, despite ongoing concerns over the oil and gas market. The rental buying season also started a little later this year, so we’re looking at a slightly compact season.

In addition, we see the change to tighter emissions legislation as a challenge to rental buyers – with the cost of the latest equipment going up, rental companies need to see rate gains too, and it’s a challenging market. However, there is underlying strength, and we are expecting a good year.”

Generac recently invested in a majority share of PR Industrial, the owner of the Pramac brand. Founded in 1966 by the Campinoti family and headquartered in Siena, Italy, Pramac is a manufacturer of stationary and mobile generators for a variety of commercial and industrial applications.

Mr Hanson said, “The Pramac deal allows us to quickly gain access to new markets, and offer full turnkey solutions to customers including lighting towers and pumps, thanks also to our acquisition of Tower Light, as well as portable heaters.”

The company showcased a range of products at The Rental Show, including its 6kW Magnum MLT4060MVD LED mobile light tower and 6kW Magnum MLT6SMD LED light tower, together with examples from its wide range of portable heaters, trash pumps and generators.

“Housing is good and the construction sector is going fine. We all know oil and gas is down, which was tough for generator manufacturers last year. But construction and infrastructure growth have picked up, so we expect demand from rental to be at least steady with last year if not better in 2016.”

And Cummins general manager for the North American rental business John Gibbons added, “Most of our customer base has been able to diversify enough to ensure that the impact of the downturn in oil and gas has been mitigated.”

During the exhibition, Cummins displayed its 200KW Tier 4 Final rental generator set as well as the Cummins QSF2.8, QSF3.8, and QSB4.5 engines and after treatment systems.

Hilti also forecast growth. The manufacturer, which unveiled new DSH 700 and DSH 900 hand held petrol-powered saws, and the Hilti TE 1500-AVR breaker, said it expected to report between 7% and 8% growth in 2016, with the US market doing well but uncertainties remaining over some international markets, particularly China.

Michael Kennedy, senior vice president of rental and authorised distributors at Hilti North America, said the company’s latest launches were designed from the ground up to incorporate features and requirements that rental professionals have asked for, like high power for fast cutting speed and easy-to-remember starting procedure with simple controls.

“Reliability is key – if rental companies don’t have tools that are ready to rent, they’re not going to make money,” he said.

And on the utility vehicle side of the market, Cushman also reported growth. National commercial accounts manager Donald Pieper said the company had worked hard to make sure its vehicles were up to rental specification; with rugged and durable designs a key factor.

“Our UTVs are used in a diverse range of rental applications, from solar fields to construction sites – particularly commercial, as well as nuclear projects, residential projects, really anywhere where there is a need to move people safely around a site. As rental companies diversify, our products are becoming more interesting thanks to their versatility.”

This is just a snapshot of sentiment from the show – watch out for further coverage of new releases in upcoming issues of IRN, while our showguide can be found here, with further stop-press news in the links below.

The American Rental Association’s 60th annual convention and rental trade show took place at the Georgia World Congress Center, Atlanta, US. It ran from 21st to 24th February, with the exhibition hall open from 22nd February. Over 650 exhibitors were present.