US$8.7 billion investment in Kazakhstan 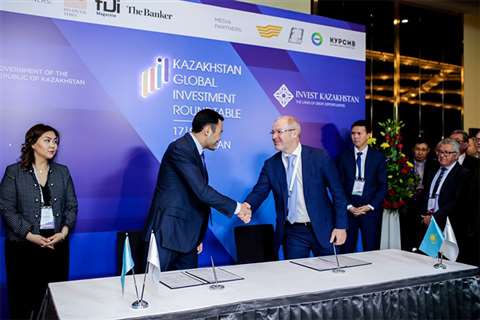 It has been reported that Kazakhstan has made 43 agreements worth over US$8.7 billion with foreign companies looking to invest in agriculture, trade, mining and metallurgy.

These investments were achieved through the 2019 Kazakhstan Global Investment Roundtable (KGIR). The event was organised by the Kazakh Ministry of Foreign Affairs and the Kazakh Invest national company.

The event has grown from last year, when 32 agreements were achieved worth US$4.7 billion.

The event was headlined by the Kazakhstan Prime Minister, Askar Mamin, and was carried out to promote Kazakhstan’s investment potential and introduce new technologies.

It was said that over 1,100 business executives, policy makers and international experts from over 41 countries attended the event, though the investment specifics are not detailed.

Many different kinds of investment were proffered, including investment in the Turkestan region Akimat from Turkish YDA Holding, which will cooperate in the construction of an international airport and its operation.

Further investment will come from Russian company AEON Corporation which has offered to create a logistics hub at an international airport.

Kazakh Invest Chairman Saparbek Tuyakbayev said that foreign companies’ readiness to invest in the Kazakh economy this year signals their positive perception of the country.