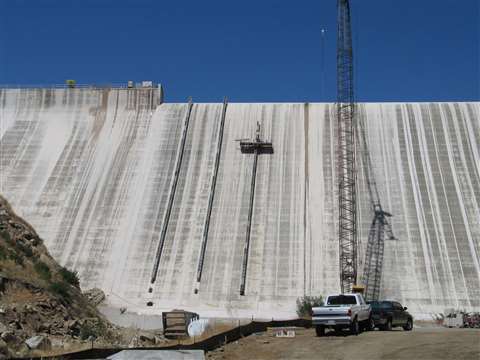 The 220-foot-tall San Vincente Dam in San Diego, CA, needed to be raised – by 117 feet. Fraco Products was called in to help.

There's not a lot of good news that comes out of Detroit, MI.

For the past two years, the home of Motown landed in the top five spots on Forbes' most violent cities list, and its infamous former Mayor, Kwame Kilpatrick, made national headlines for the wrong reasons. And let's not even talk about the Lions.

Despite its bad boy reputation, the city does hold a few gems, including the architectural wonder known as the Guardian, a 36-story art deco skyscraper built in 1928.

A piece of art

The Guardian rests on a granite base in the middle of downtown Detroit on an entire city block. It includes a north tower and smaller octagonal south tower that are connected with a nave-like block.

The National Park Service has deemed the Guardian a National Historic Landmark, and to keep it in all of its glory, a bout of restoration and preservation was needed.

Both personnel and materials would need to be transported and lifting during the renovation of the Guardian, which is where Beta Max came in. "The complex architecture and construction of the building presented many specific challenges during the restoration project," the company says.

Tooles/Saches purchased a Max Climber 3300 for the job and also asked Beta Max to engineer and accommodate several roller tables that were set up on each floor of the building.

"The tables made laborious heavy work a lighter, safer job by cutting down on time and minimizing injury," the company says.

Materials were raised by a forklift onto the Max Climber's platform which then delivered the materials and also removed debris from more than 16 floors spanning across a 32-story range.

The Climber's ability to move at 70-feet-per-minute proved a fast solution, and it also stopped at each floor using landing sensors to ensure accurate deliveries, Beta Max says.

"Safety is at the forefront of every detail in the Max Climber's design," says the company. "The 3,300-pound capacity lift includes overload sensors that alert the operator as soon as payload capacity is reached, and it is outfitted with saloon-style doors for easy loading."

The Guardian came out shining and completely restored on time.

Tamping out the fire

It towered 450 feet tall and needed to come down. Atlanta-based Mastclimbers, LLC had quite the job ahead of them assisting Commonwealth Dynamics to bring down the chimney at Goose Creek Power Station in South Carolina.

By using a combination of mast climbing work platforms and position-actuator-manipulator units (PAM) to increase the efficiency of the jack hammers, the job - which would normally take a year to finish - was wrapped up in 65 days.

"The mast climber units had to be specially configured to take account of the increasing diameter of the stack as it came down," said Mike Pitt with Mastclimbers.

"The PAM units were brought in to reduce repetitive strain and fatigue. The PAM unit enables the operator to manipulate the heavy jack-hammer as if it weighed next to nothing."

The stack was broken down by 7 feet per day.

Thousands of miles south in the Gulf of Mexico, an offshore drilling unit was in need of some serious maintenance. Canadian mast climber manufacturer, Hydro Mobile, was contacted in the winter of 2010 by the drilling company that was searching for a safe solution to maintenance at 250 feet in the air - above the water.

One of the company's semi-submersible oil rigs was shut down for a month for maintenance. Chad Baumgartner, director of business development for Hydro Mobile, was contacted by the drilling company's project manager to design a custom-fit access solution.

Hydro Mobile's Sony Trudel, the company's research and development assistant director, came up with a customized F-100 mast climber that would carry workers, tools and materials up and down a 160-foot vertical pipe racking system of the oil rig.

The pipe racking system has two arms that are driven toward and away from the well center on which the drill pipe is stacked.

Surrounding the pipe racking system, the F-100 carried all tools and workers up and down the structure with nine power supplies on its 13-foot-wide decks. It allowed workers to drill, weld, fix electrical issues and other operations.

It also provided access to dismantle a 70,000-pound drive system that had to be replaced at the very top of the rig.

The drilling company chose Hydro Mobile over its usual 4-foot by 4-foot hanging basket because of safety and ease of operation, the project manager says.

"The Hydro Mobile system has been a big success in doing everything we wanted it to do. It provides a very safe access method, a wide and stable workspace and avoids the risk of damaging the pipe racking system.

"It helped us save time and money by keeping our workers on the job even in rough weather," the manager says.

Trudel, who spent a week on the rig and trained 15 people for the installation, operation and maintenance of the mast climber, says the client was happy with the speed, capacity and workspace that the climber provided.

"They will shortly be installing it on another oil rig that requires maintenance," Trudel says. "This system is a small revolution for the workers. They feel safer, at ease and work more efficiently than with the hanging basket."

California love
Over on the West Coast, a dam project with all sorts of twists and turns needed a tall solution. The 220-foot-tall San Vincente Dam in San Diego, CA, needed to be raised - by 117 feet.

Canadian mast climber manufacturer Fraco Products Ltd. was called on with American Hydro, a hydrodemolition company, to install mast climbers on the dam.

The San Vicente Dam needed up to three inches of its dry side removed to create a bonding surface for 800,000 cubic yards of new roller-compacted concrete and conventional concrete, which will put the dam at its final total of 337 feet tall.

In order to complete these tasks, Fraco installed mast sections on the inclined concrete face of the San Vicente Dam, but not without slight complications.

"The first mast section placement to the far left took four days [to install] as the dam is not quite flat as it was supposed to be; conditions changed as each 30-foot mast was flown into place," said Tim Riley, Fraco's Southern California representative.

"The second layout of mast took about two days with some fine tuning of the custom shims. We installed the third mast section in one day as we built the mast on the ground and copied the shim and space brackets to match the second install."

After the three rails were in place, American Hydro came in and started the concrete removal process. As each section was worked on, the mast sections were moved to another area of the dam. The process is expected to be completed by the end of April 2010, Fraco says.

The entire $568 million project is one-of-a-kind - the dam raise is the tallest in the US and the tallest of its type in the world. Work started in 2009 and is expected to finish up in 2012.