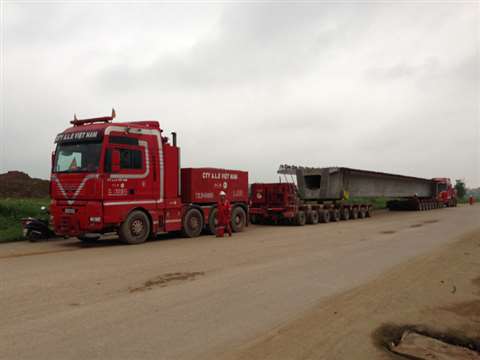 At the beginning of December ALE was halfway through a project to transport bridge girder sections for a monorail system construction programme in Vietnam.

In total, 254 bridge girders will be moved on the project. The girders weigh 230 tonnes each and are 32 metres long. They will be transported 13 km from a casting yard in Duong Noi to the site of the Cat Linh - Ha Dong line.

Van Duc Trung, ALE operations manager, said, “We are really proud to have such an instrumental role in this landmark project for the country. So far, we have moved over 40 % of the girders and we are on track to complete on schedule.

“We have carefully selected the most suitable equipment and configurations for the transportation. As the girders are 32 metres long, we have utilised two bolsters for support. The team are working hard and we are continuing to progress with this milestone project.”

The monorail project will be completed by the end of 2015.