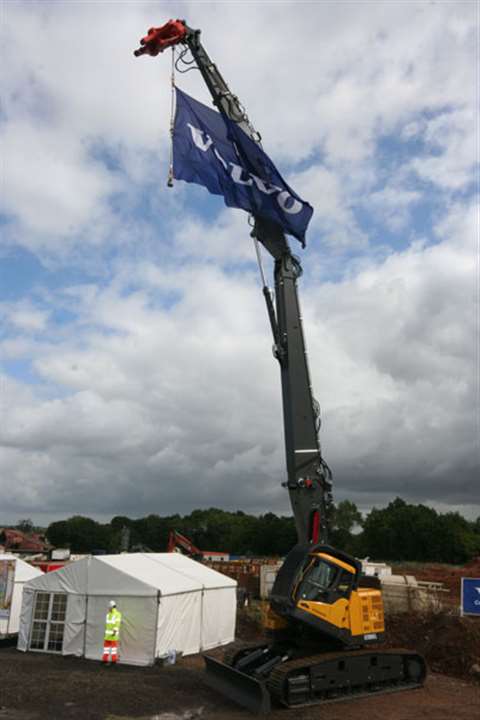 The Kocurek modified zero tail swing Volvo EC305CLD has a working height of 21 m and can carry a 2.5 tonne tool.

An initiative from the UK division of Volvo Construction Equipment, working with Kocurek, the Ipswich based excavator modifier, has resulted in a true conversion special in the shape of a high reach, zero tail swing design.

The base ECR305CL is built in Korea and was initially intended for the US market. A few units have made it into Europe, but the modified demolition version is the first in the UK.

With an initial weight of 37 tonnes, Kocurek has added an additional 10 tonnes of counterweight (built into the sides of the undercarriage, under the front of the upper structure and on top of the standard counterweight) to result in an all up weight of just under 50 tonnes, and an tilting cab (to 30 degrees).

The machine was supplied to Kocurek by Volvo with a dozer blade, which will come as standard on the conversion, to add further additional weight, as well as to provide even more on-site flexibility.

The modified machine features a Kocurek modular joint, which allows the boom to be changed over into standard digging configuration - with a straight dig boom, the EC305CLD offers a working height of 14.5 m (47.5 ft), again with a 2.5 tonne tool. All additional counterweighting is 'bolt on' and can be removed in a matter of a few hours.

Currently, there are no plans for an extending undercarriage, but Volvo GB says that one could be fitted if required.

The cab hydraulics are fully protected and covered to ensure safety. It also features full FOPs protection and bulletproof glass on the top and front.

Volvo GB is confident about the prospects for the conversion and, working with Kocurek, hopes to produce four or five machines in 2011