Manitowoc unveiled its new Potain Hup line of self-erecting tower cranes at Bauma, Munich. The first crane in the range was the Hup 32-27, featuring an adjustable two-section mast that has a third section contained within the second. This design allows the third mast section to be telescoped out, boosting the working height of the crane to 27 metres.

The second model from this series, Hup 40-30, has a telescopic mast that can be set at different working heights. Its 40 metre luffing jib has three positions: horizontal, elevated 10 degrees and by 20 degrees. 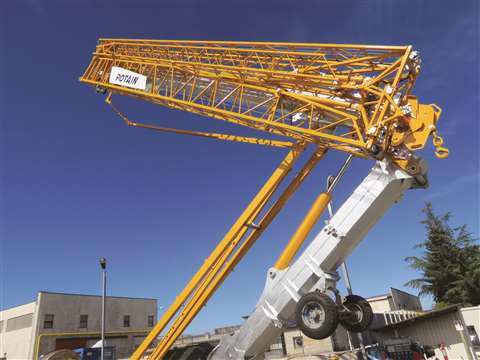 Wolffkran presented its newest, and biggest, flat top tower crane at Bauma, Munich. The Wolff 7534 is the latest addition to the ‘clear’ range after the manufacturer released its first XL flat top crane, the Wolff 7032 clear, at the previous exhibition in 2013. The 7534 extends the ‘clear’ series into the 315 tonne range, the company said. 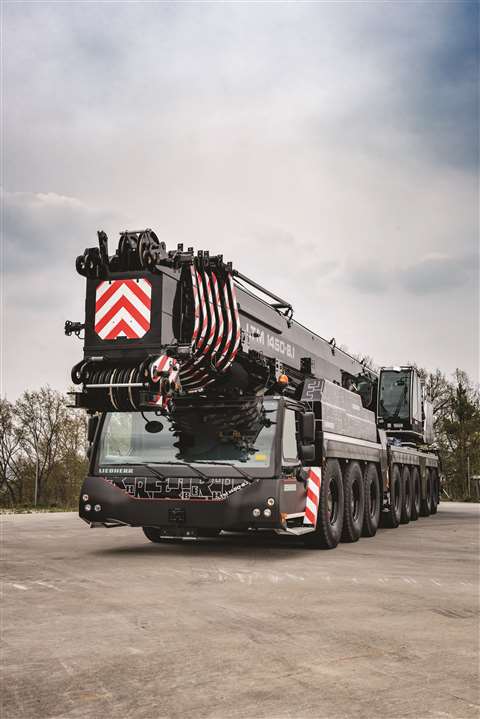 The 450 tonne capacity LTM 1450-8.1 is said by manufacturer Liebherr to have great economy and simple set-up on site

Japanese manufacturer Maeda released the MC815 last year, with an 8 tonne capacity – the most powerful crane in the company’s range. It gives a 19.4 m tip height and a one tonne pick and carry capacity. The first unit was sold to UK-based Hird.

New products for Unic Cranes, part of the GGR Group, include the 2.4 tonne URW245 spider crane, designed for the European market and the conversion of the 2.9 tonne URW376 to run on deep cycle gel-filled batteries.

The latest addition to Jekko’s fleet is the pick and carry 5 tonne capacity MPK50. The company is also working to increase its optional range, including manipulators for pipes, beams and glass.

Liebherr-Werk Ehingen launched the 450 tonne capacity LTM 1450-8.1 all terrain – an 8-axle crane that is said by the company to be able to perform jobs normally reserved for the 500 tonne class. At 85 m it has the longest telescopic boom in the world that can be carried on public roads with a 12 tonne axle load limit.

Another interesting addition to the Grove fleet is the four-axle GMK4100L-1, which was launched in February 2016. It is the new version of the GMK4100L with better load charts, a more compact design and a new ergonomic carrier cab, the company said.

Chinese crane manufacturer XCMG unveiled its 100 tonne XCA100 at Bauma, Munich – part of its new G-series of 17 all terrain and truck cranes. Its seven section, 60 metre boom and extensions can give a lifting height of 88 m.

From ‘super’ to ‘lighter’

International heavy lifting and transport company ALE released the 5,000 tonne capacity AL.SK350 last year, said to be the world’s largest land-based crane. The first lift took place in late 2016 where units of up to 3,000 tonnes were lifted on site at an offshore yard in Brazil for the construction of the P-74 FPSO (floating production, storage and offloading) vessel.

On the other end of the capacity scale, the company has launched a lightweight crane series for lifting in confined spaces on offshore and civil construction projects. The first crane is the smallest, lifting 6 tonnes to a 12 metre radius. Its light weight is because it is made of aluminium. Other models are planned, including larger steel ones that can be doubled up (two units side by side) to give a capacity of 180 tonnes.