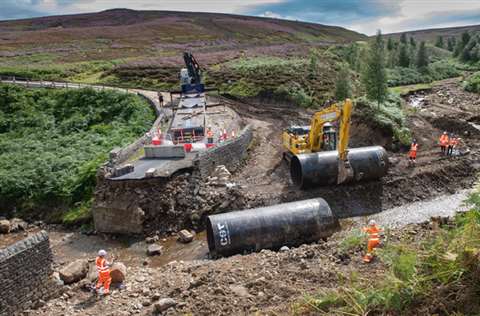 Parts of an unused wind turbine have been used to form a temporary crossing over a stream after a stone bridge collapse in the Yorkshire Dales National Park in England, UK.

North Yorkshire County Council said that its engineers and contractors had worked around the clock on the emergency infrastructure repair in order to reconnect the rural communities of the dales.

Two giant tubes from the turbine were lowered into the stream, known as Cogden Beck, to enable engineers to construct a temporary bridge and road diversion over them for local traffic.

The tubes, supplied by Cleveland Steel & Tubes, are made from steel 32mm thick and measure 2.25m in diameter.

North Yorkshire County Councillor Don Mackenzie said, “The damage caused by the unprecedented rainfall in parts of Swaledale has caused unimaginable upheaval to communities in the area.

“We know how vital these roads and bridges are to everyday life for those living in the affected areas, so we are delighted to report we have managed to make so much progress in such a short space of time.”

Cogden Bridge South forms part of the route for the international cycling race, UCI Road World championship, which is due to take place in September. The council said that it intends to rebuild the bridge, a traditional Yorkshire Dales masonry bridge, in 2020.

Roy Fishwick, managing director of Cleveland Steel and Tubes said, “Our repurposed steel is proven to deliver up to 96% savings on carbon emissions compared to new steel, so it is an environmentally friendly solution as well as a cost-effective one.

“As a local supplier we could also immediately provide the tubes, enabling the Council to quickly restore access for residents as well as the tourists upon which this region relies during the summer.”