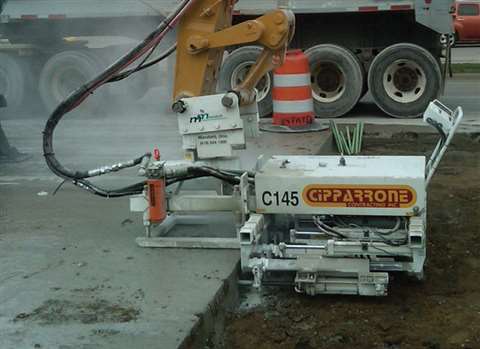 The annual World of Concrete show takes place in Las Vegas, US in February, with educational seminars running from 2 – 6 February, and the exhibition form 3 – 6 February. With the US construction market picking up, the organiser, Hanley Wood, says it will be the biggest show for six years with more than 600,000 ft2 (55,750 m2) of net space and more than1,100 exhibitors.

As a major annual event in the calendar, World of Concrete is often the scene of new equipment and product launches – not only for the concrete construction industry, but also for general construction applications.

But in terms of specialist concrete equipment, Schwing’s stand will feature updated versions of the S 58 SX and S 61 SX truck-mounted concrete placing booms. Changes include a horizontal hydraulic chain track, rather than a hose reel, which tends the hydraulic hoses when the outriggers are deployed. Schwing said this improves reliability.

The concrete delivery pipe on the deck has been rerouted for better accessibility when changing pipe sections, while hydraulic oil capacity has been increased +43% which benefits filtration and reduces heat. The water tank is now centrally located at the rear of the machine with +25% more capacity.

In operation, the machines can now use Schwing’s Easy and Easy 200 set-up systems, which allows the boom to be operated in a limited arc with only two or three outriggers deployed. This saves space and makes for easier set-ups on confined sites.

Reed will introduce its new B50HPS shotcrete pump, which it describes as, “an extremely high performance pump at an economical price.”

Terex’s stand will include the updated version of its Bid-Well 4800 automatic roller paver. The machine offers paving widths from 11 to 51.8 m and includes the patented Rota-Vibe system which provides vibration at 83 Hz over the roller’s 292 mm length to consolidate the top 64 mm of concrete. The company said this delivers a denser and more uniformly consolidated concrete surface.

Besides standard products, the company will have its dedicated gas-leak detection drill, The Hornet, on display. This provides an innovative and ergonomic alternative to hand drilling gas-leak detection holes in roadways above gas mains and is designed for use by municipalities and contractors who work on municipal projects. The Hornet isolates the vibration to the machine, which minimises operator fatigue. Furthermore, the operator can stand in an upright position while drilling, which helps prevent lower back injuries.

Also on show will be machine-mounted units, like the A-2V and H5, which can be mounted on excavator or backhoe loader booms for dowel pin drill work in repair and patching operations.

Brokk will be showing the upgraded version of its Brokk 400 remote-controlled electric demolition machine. New features include a larger undercarriage for heavy-duty work and enhanced stability when operating with heavy attachments. The hydraulic system has also been improved for greater efficiency and more consistent power.

E-Z Drill’s stand will feature its range of 210 drill attachments for dowel rod hole drilling. The three models available are the three-gang 210-3 EQ MT, four-gang 210-4 EQ MT and five-gang 210-5 EQ MT and the company says they compatible with most models of backhoe loader and excavator.

Aimed at full-depth road repair and patching projects, the models feature a control panel mounted on the drill to provide convenient operation from the ground. The units are capable of drilling 5/8- to 2-1/2-inch (16 to 64 mm) diameter holes, to a depth of 18 inches (457 mm).

The units feature a side-shift control which means the carrier operator does not need to position the unit in the exact drilling location – it can just be positioned in roughly the right area, with fine adjustment being carried out using a toggle switch on the control panel. This can mean two sets of holes can be drilled without having to reposition the entire drill and carrier.

Decko Products will show its new Power Assist Wheelbarrow (PAW), the Pro PAW. This offers 300 lbs (136 kg) of capacity and comes with a 24 V, battery-operated two-wheel drive system to allow such heavy loads to be moved and manoeuvred. The company says that with this system, the 6 ft3 (170 l) tub and steel frame can be taken up inclines as steep as 15° fully loaded.

Control is via a simple pushbutton and forward/reverse switch, and the forward gear offers a ‘powerburst’ function to help tackle steep hills or other difficult ground. The unit comes fitted on 15 inch (380 mm) tyres and a charger is included for the dual 21 V battery system.

Batches up to 350 lbs (160 kg) can be mixed at a time, and the machine’s trolley means these can be moved and placed by one person. The standard unit comes mounted on heavy-duty castors for use on floors, and air-filled tyres are available as an option.

Formwork manufacturer Pilosio will feature its Magnum Evo panel formwork at the show. The modular system can be used vertically or horizontally and requires only one tie rod per 1.8 m2 and one connection clamp every 3.6 m2. The capacity is 80 kN/m² for walls and 150 kN/m² for columns.

The steel framework is available either painted or powder-coated and the facing material can be either traditional phenol film-coated birch ply, or supplied with a one- or two-sided plastic coating.
Also on show will be the company’s MP heavy duty tower system.

The system comprises simple modular components and a range of accessories, allowing it to be used for either scaffolding or shoring. Each vertical support has a capacity of 200 kN, or 800 kN for a four-leg tower.

Caterpillar will use the show to unveil its E2 series of five new compact radius excavators from 3.5 to 8.5 tonnes. A key feature is the new High Definition Hydraulic (HDH) system, which has load sensing and flow sharing capabilities leading to better precision, performance and controllability. In addition to these improvements, Caterpillar said closer integration with the 18 kW engine on the 303.5E2 has delivered -8% lower fuel consumption and +7% more efficiency than the E-series model it replaces.

The 305.5E2, 305E2, 304E2 and 303.5E2 all include a redesigned operator station which includes a wider opening, a high quality suspension seat, easy to adjust arm rests and an overall improved ergonomic layout. Caterpillar said, a new interlocking front window system, updated operator interface controls and all pilot controls meant these machines offered the best operator environment in their class.

The E2 models are equipped with a digital control panel designed for Cat compact excavators, the company’s Complete Operation, Maintenance, Performance, and Security System (COMPASS) system. This includes an anti-theft system, which requires a five-digit alphanumeric password to start the machine, an automatic engine-idle selection and an adjustable auxiliary-flow control for work tools.

The 1-litre class engines feature heavy-duty connecting rods, large crankshaft bearings and three-ring pistons. Subaru says the hardened exhaust valve and seats can handle high temperatures, which improves engine performance, efficiency and overall life of the engine. Temperature sensors are located on the engine heads and have an optional engine shutoff to prevent any damage from overheating.

In addition, the standard four-cycle engines feature a dual element air filter that protects the engine from dust and reduces maintenance. An optional Donaldson canister style air cleaner has an inlet pre-cleaner, which offers additional filtration by removing a majority of the particles before they reach the filter, minimising maintenance and extending the intervals between cleanings or filter changes.

Perhaps surprisingly, exhibitions like World of Concrete are good places to find out about shows in other parts of the world. For example, Brazilian construction and construction equipment association Sobratema will be at the event promoting its Construction Expo 2016, which will take place São Paulo in June 2016. This is expected to attract some 20,000 visitors from theBrazilian construction industry and key municipalities.

This year’s expo will be themed “Cities in Motion - Solutions in Construction for Brazil’s Municipalities” and will focus on the construction needs of Brazil’s major cities and municipalities.

But with 1,100 exhibitors taking part in the exhibition, this preview covers only a fraction of the new equipment that will be on display. As ever, the best way to find out what’s new at World of Concrete is to visit the show for yourself.