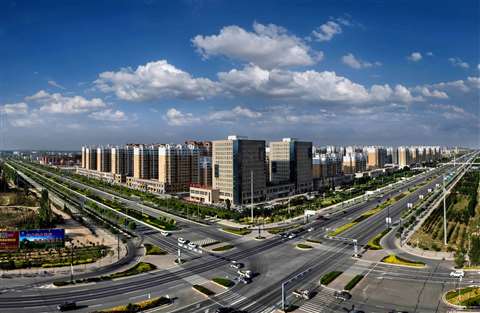 A rendering of what the New District could look like

The construction of Lanzhou New District in China will be the country’s biggest new district at 49km long and 23km wide when fully constructed a decade from now.

The development of the district, the fifth in China, is said to be essential to the country’s future. “It is the important connection point between the Silk Road Economic Belt and the Eurasian continental bridge,” said Ma Shengjun of Gansu Road & Bridge Maintenance Corp.

The Silk Road Economic Belt is one component of the larger Belt and Road Initiative, an enormous nationwide infrastructure development project.

An Ammann ABA 320 UniBatch Asphalt-Mixing Plant will produce asphalt for all elements of the district’s infrastructure. The plant will operate almost continuously over the next decade to supply the needed asphalt mix. It has a production capacity of 320 tonnes per hour.

“The project is to build a bridgehead for the development of the western region, and to build a modern, small-scale city on the Silk Road,” Shengjun said.

“This makes the district an important economic growth point in northwest China – a key industrial base for the country. It is also an important strategic platform opening to the west.”

The Lanzhou area is mostly undeveloped and the few asphalt plants there or nearby are reported to have limited technology and production capabilities.

The ABA UniBatch’s green features were said to be the key factor in the purchase; the Chinese government has dictated that emissions be minimised and other sustainable efforts taken, including covering the entire plant to lessen dust, reduce sound and provide aesthetic appeal.

ABA UniBatch plants are said by the company to utilise an efficient drying and heating process that conserves energy and ultimately reduces costs. The burner control regulates the drying process to ensure reduced fuel consumption and low emissions.