Mecalac puts on a show 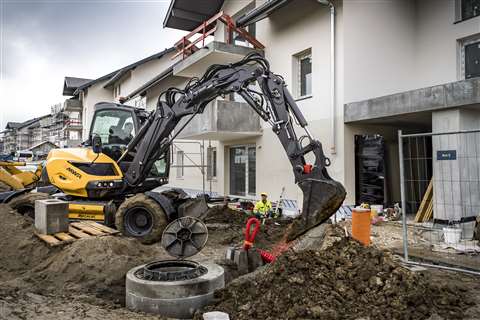 French compact equipment manufacturer Mecalac says it will highlight the mobility, productivity and versatility of its latest models, as they undertake regular 20-minute choreographed displays during ConExpo.

The company will be located in the Festival Grounds (Booth F2658), and visitors will be able see machines including the 9MWR wheeled excavator, 6MCR crawler skid-excavator, AS700 swing-loader and the 6MDX dumper.

Alexandre Marchetta, CEO for Mecalac, said, “We organized the ConExpo-Con/Agg demonstrations to prove the speed, stability, manoeuvrability, sustainability and overall productivity of Mecalac products using real-world scenarios operators often encounter on the jobsite. We’ve brought our game-changing equipment to the North American market because we believe it fills an unmet need. These demonstrations will give attendees a chance to witness our revolutionary solutions first-hand.”

During the demonstrations, Mecalac says, visitors will appreciate the 9MWR wheeled loader’s stability, regardless of the rotation angle of the upper carriage.

The series, it says, also features cabins that are 20% lower than comparable models, with centred, integrated steps for ease of access. The company adds that, at 231cm wide, the 9MWR is 2.5 times more compact than a traditional excavator, which, combined with four-wheel steering, allows enhanced turning mobility in narrow spaces.

Mecalac also highlights the speed of its 6MCR crawler skid-excavator, which, it says is up to two times faster than comparable compact excavators and features a hydrostatic transmission motor, allowing operators to move up to 0.75m3 of material at 10kmh.