Mecalac’s new skid excavators are two machines in one 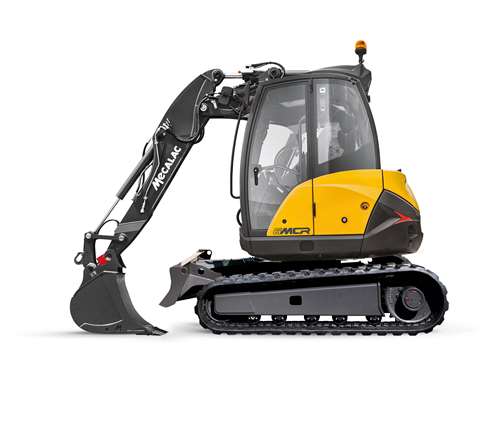 The MCR Series includes three models – the 6MCR, 8MCR and 10MCR – intended to provide the swiftness of a skid steer with the 360-degree rotation of an excavator.

“One of the main goals of every Mecalac design is reducing congestion on the jobsite by providing one machine that can take the place of several,” says Peter Bigwood, general manager for Mecalac North America. “The MCR Series is truly multifunctional, acting as a skid steer, excavator or rough-terrain forklift, depending on the attachment.”

MCR models feature a hydrostatic transmission and drive motors powered by a dedicated pump to allow them to go faster than traditional compact equipment. Each of the three machines is capable of travel speeds up to 10 km/h (6.2 mph), the company says.

Mecalac’s patented quick coupler, CONNECT, is designed so operators can transition between attachments without leaving the cab and without risk of dropping a bucket. With a skid bucket attachment, contractors can move up to .75 cubic meters (.98 cubic yards) of material at top speed or rest the bucket against the blade for applications such as grading and ground leveling.

MCR units combine Mecalac’s patented three-part boom system and a rotating ability to increase flexibility and reach while minimising unnecessary movement. The three-part arm can also be tucked in, even with a full bucket, allowing for extra compactness and mobility without overbalancing the unit in the front for a true zero-turn radius.