‘It’s the highest standard ever’

This year’s World Demolition Awards are not just the all-time best in terms of the quantity of entries – the quality is raising the bar as well.

That is the view of awards judge John Woodward, who took to Twitter to show his enthusiasm for the crop of companies aiming to get their products and projects on to the 2018 shortlist for the ceremony in Dublin, Ireland in November.

Just finished judging my categories in the @KHL_DRI @WorldDemoSummit Awards. This year the standard is higher than ever. Difficult job.

John, a respected figure from his years in the industry, most recently with C&D Consultancy in the United Kingdom, has been involved with the awards – part of the World Demolition Summit (WDS) – since the first event in 2009.

So it’s from a position of considerable experience that he praised this year’s candidates on social media.

“This year the standard is higher than ever. Difficult job.” 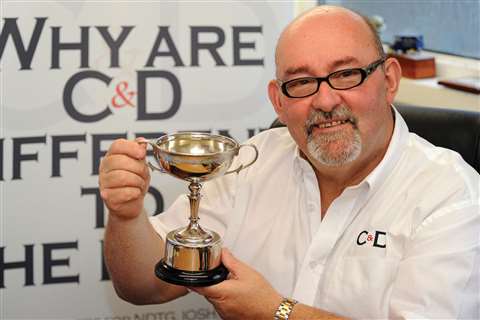 John Woodward, seen here receiving an award (from the Institute of Construction Management) has been choosing winners of the World Demolition Awards since the beginnings of the event

The nine judges are subdivided into smaller teams, between them covering 11 categories that will be keenly contested by demolition contractors and equipment suppliers.

Two more awards – the New Entrant Award and the overall World Demolition Award for the best entry received in any category – will also be presented at the gala dinner on the evening of Thursday 8 November.

The WDS also includes a one-day conference and a networking drinks reception. It takes place at Dublin’s iconic Aviva Stadium and is organised in co-operation with the European Demolition Association. Headline sponsor is Volvo Construction Equipment.