A trio of innovations from ALE

Heavy handling, transportation and installation specialist ALE has launched three complementary innovations that are particularly suited for power and energy sector work, among other applications. 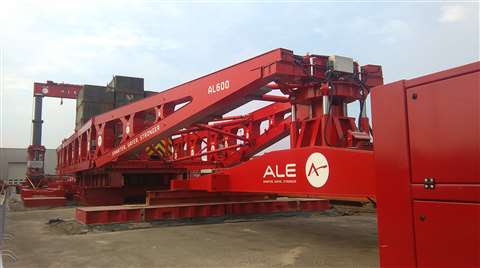 The frame will be used to transport loads under small bridges and to reduce axle loadings. When negotiating bridges, the load is suspended in the girder frame with minimum road clearance in order to transport it under the bridge without needing to either jack-up the bridge or build costly bypasses.

The AL600 has a modular design, which means that ALE can drive in variable configurations to optimise the transportation of different types of loads, such as steam turbines, generators and transformers. The basic configuration uses the necks, a 15 m main beam and 7 m load spreaders. By using a smart design and the highest grades of materials, ALE claimed the AL600 has a record-breaking self-weight/carrying capacity ratio.

On the AL600, the necks from the load carrying beams to the tower on the trailer become narrower so that the ends of the necks are narrower than the trailer width. According to ALE, this means the convoy can navigate tight bends without taking up as much space, negating the need to remove lamp posts and other obstacles.

The girder frame also has control systems for steering, height adjustment, camera systems and shock logging – all operated from the control cabin on the rear trailer.

“We wanted to build a transport solution that suited our requirements to transport heavy loads that could be utilised with our current trailer fleet, whilst maintaining safety and low axle loadings,” explained technical director, Ronald Hoefmans. “Other standard equipment suppliers couldn’t fulfil our needs and we made the decision to design our own. The AL600 has been designed with strength and operational capabilities like no other frame in the industry.”

The AL600 has now been function and load tested in the Netherlands. It will now be shipped to its inaugural project in Chile, South America where 80 axle lines of modular trailers in 2 x 4 file 20 configuration will be used to bring the axle loads within the road limitations. For this job, the 15 metre main beam will be extended with a 5 m extension and the load spreaders will have a 3.5 m extension to reduce the bending moment in the trailers. 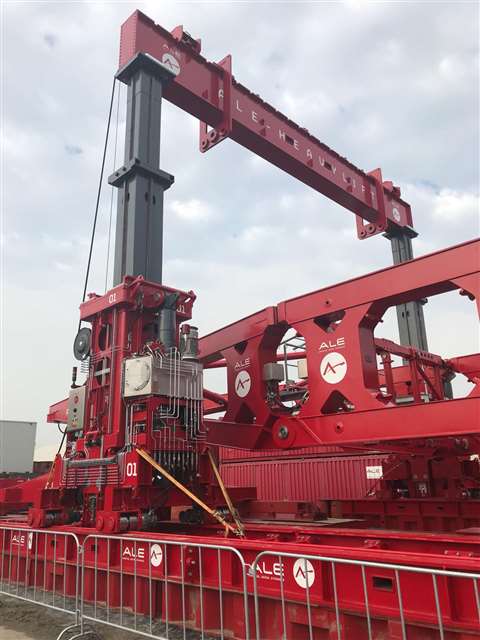 ALE’s second innovation is its new telescopic lifting gantry, the TLG1000. The lifting gantry has a 1,000 t capacity on four towers. According to ALE it is the first system in a new fleet of high capacity hydraulic gantries. The TLG1000 has been designed in-house with a variable track width. This means the system can run on tracks between a standard 915mm in width up to 1,750mm wide, thus adding greater stability said ALE. The three-stage system has a 1,000 t capacity at all stages up to 12m high. It also has additional safety features, including a mechanical lock system and monitoring systems to check any ground settlements or tower deflections.

“As users, we know what works in practice and we couldn’t find anything else on the market which fulfilled our needs,” explained Hoefmans. ”We wanted a lifting solution that has a high capacity without compromising on stability. This lifting gantry has been designed with more horizontal loading than other standard systems on the market. Furthermore, it is not only stronger but the lifting capacity of the system remains the same throughout all three stages of the lifting process. With this unique feature, combined with the other operational benefits, I expect this system to be in demand throughout our regions globally, with the need to add additional systems to the fleet.”

The TLG1000 has been function and load tested at ALE’s R&D facilities in the Netherlands. It will be shipped to its inaugural project in South America.

Finally, ALE has launched its new Route Survey Tool which it claimed is set to revolutionise the way route surveys are carried out in the heavy lifting industry. The Route Survey Tool is an ALE-designed computerised system that automatically logs accurate route descriptions on digital maps. Critical sections of the route are measured and photos, video footage and drawings are generated for more in-depth analysis. 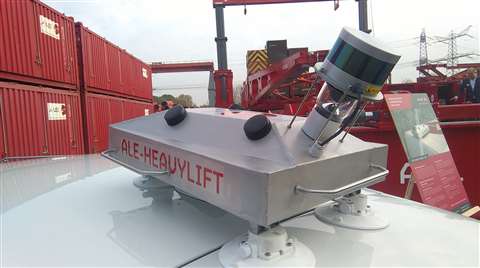 As part of the engineering phase, ALE said the Route Survey Tool enhances its overall FEED offering to provide a more efficient, accurate and reliable route survey that no other company can provide.

Safety is also improved and project efficiency optimised, ALE stated, as the separate Driver Assist tool helps on the actual route by instructing drivers of the route ahead. By providing them with automatic data, they can prepare for complex parts of the route beforehand and improve the overall time and cost efficiency of the project.

“Route surveys have been integral to the heavy transportation projects and engineering services for years. Current systems, which are manually logged, are often susceptible to human errors and can be time consuming; we wanted to design a solution that was not only safer, more accurate and reliable, but one that could also cover longer distances and was a quicker alternative,” explained ALE’s R&D manager Harrie Smetsers. “The Route Survey Tool represents a revolutionary and easier way to carry out reliable route surveys in a quick and safe manner, and is the only system on the market that conducts a consistent and precise route survey without the need to manually enter information or step outside of the vehicle.”

The route survey tool has been fully tested and will now be implemented across the ALE group world-wide.