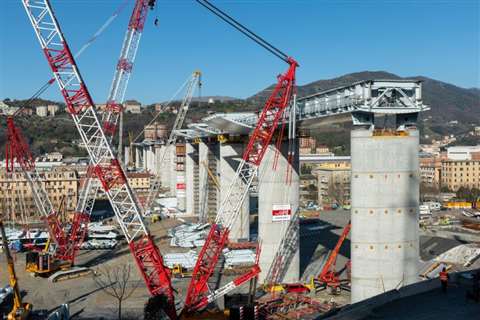 Salini Impregilo reports that a crucial stage of construction on the new Genoa bridge has been reached as, with its joint-venture (JV) partner Fincantieri, it has completed the installation of the structure’s 18th and final pier.

At the same time, the JV, known as PerGenova, undertook the raising of the first of the bridge’s three 94m-long decks. When completed, the bridge will carry 19 spans of deck, but the long spans have proved to be the most challenging for the project’s engineers.

The team ultimately decided against cranes and instead employed strand jacks to raise the 1,800-tonne spans, using cables to hoist them into position at a height of 40m.

In a release, Salini Impregilo said “All the vertical structures are in evidence, while the combined length of the horizontal spans has reached 500 out of a planned 1,067 metres”.

The company said there are approximately 600 people working on the project on a daily basis and encouraged people to visit the PerGenova website (www.pergenova.com) to follow their activities in real time.

The “highly symbolic” bridge is being built to replace the Morandi bridge, which collapsed in August 2018, killing 43 people.

PerGenova has committed to complete the new bridge by this summer.

Pietro Salini, CEO of Salini Impregilo, has previously said the PerGenova team would build “a hyper-technological bridge, sustainable because it is able to power itself, safe, delivered to the citizens in record time, and built in the first totally transparent construction site in the world, with webcams active 24 hours a day, seven days a week”.