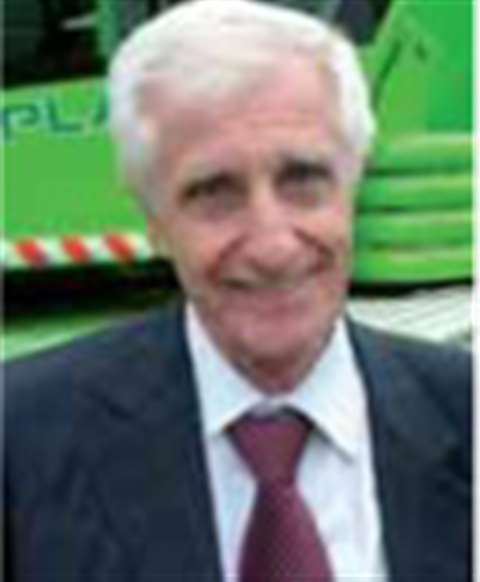 It was a telehandler manufacturer that had the access industry talking at Bauma with Merlo's showing of 20 m, 25 m and 30 m articulated boom aerial platforms mounted on Roto–type telehandler carriers. Merlo said it also has plans to build 10, 12, and 14 m self–propelled booms.

The MPR 20, MPR 25 and MPR 30 platforms are mounted on Roto S series chassis and will give the platforms an on–road traveling speed of 40 kmph. The platforms will also be drivable from the basket at speeds of 6 kmph with the basket stowed and at 1 kmph when raised, and up to the full height.

The machines will be in production by 2008 and will be priced somewhere between equivalent conventional self–propelled booms and truck mounted lifts.

Peter Grant, of Merlo's marketing department, said the lifts would offer end users and rental companies true rough–terrain capability as well as the ability to travel quickly on large sites or on–road between sites.

Amilcare Merlo, the company's president and chief executive officer, told Access International that its customers had been asking for access platforms for several years, but that the company would only consider it with a different type of machine; “We think platforms are very close to our telehandlers...we are ready to transfer this technology with a lot of innovations to the platform world.”

Mr Merlo said the move into access would not stop with the three MPR models, with the company now developing a range of 10, 12 and 14 m self–propelled booms that will have more in common with current access booms, but offering the same performance with a more compact structure.

The lifts were one of the access highlights at Bauma, and first impressions seemed to be positive, although the pricing levels will be crucial. One Merlo dealer, Vesa Valtonen, sales director at Rotator in Finland, told AI that they looked like good machines and predicted that “they will be a success”.